Without Steve Smith, we would be in a bit of trouble: James Pattinson

Without Steve Smith, we would be in a bit of trouble: James Pattinson
By CricketCountry Staff

James Pattinson backed the “fantastic” Steve Smith to rescue Australia once again with the bat in the first Ashes Test against England at Edgbaston.

Former captain Smith has already marked his first Test match since completing a 12-month ban imposed by Cricket Australia for his role in a ball-tampering scandal in South Africa last year with a brilliant century.

His magnificent 144 helped revive Australia from the depths of 122-8 in their first innings to an eventual total of 284.

But Ashes-holders Australia, looking to win their first Test series away to England in 18 years, were again left looking to Smith in their second innings, with the star batsman 46 not out in a total of 124-3 — a lead of 34 runs — at the close of Saturday’s third day.

“I was talking to the press before about great players and how they always stand up when you need them,” Australia fast bowler Pattinson told reporters.

“And I think he’s done that in this game. Without him, we would be in a bit of trouble.”

Smith has found himself repeatedly booed and taunted at Edgbaston, the most raucous of England’s Test grounds.

“He’s been copping a bit from the crowd, which has amused a lot of people, but to his credit, he just gets on with it,” Pattinson added. “He’s someone who lifts the group when he’s out there.”

Smith was hit on the head on 41 by a bouncer from Ben Stokes after missing an intended pull shot.

But he was cleared to bat on after being examined by Australia’s team doctor.

“It was quite a good reaction from him (Smith), wasn’t it?,” said Pattinson.

“We had a little bit of a chuckle in the dressing-room. He always puts a bit of mayo (exaggerates) on things. He’s a fantastic player and he seems to be fine now.”

England all-rounder Chris Woakes knows Edgbaston well as it his Warwickshire home ground and he said dismissing Smith on an increasingly slow pitch would be no easy task.

“He’s obviously a world-class player and we’ve got to find a way to get him out,” said Woakes, who earlier on Saturday made a valuable 37 not out in an England first-innings total of 374 that featured opener Rory Burns’s maiden Test century.

“I think on this surface in particular, it’s hard to force the issue as a bowler.

“The pace has gone out of the pitch so you almost have to build pressure to make sure the batsman makes a mistake.

“But Steve doesn’t make too many mistakes, so we’ve got to find a way.”

England’s task was made harder by James Anderson not bowling on Saturday after he managed just four overs in Australia’s first innings before suffering a calf injury.

Anderson, England’s all-time leading Test wicket-taker, now appears unlikely to bowl again in this match and fellow paceman Woakes said: “(His absence) is a bit of a blow but at the same time us as a unit have to go out there and try to do the job.” 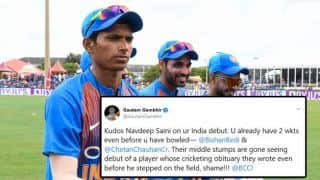