England Women had set a target of 149 runs against Pakistan Women with Charlotte Edwards top scoring with 77 off 61 balls.

England Women beat Pakistan Women by 68 runs at the MA Chidambaram Stadium in Chennai in Match No. 19 of the Woman’s T20 World Cup 2016. England bowlers bowled exceedingly well with Pakistan losing first 6 wickets around the score of 50. Pakistan were eventually bowled out for just 80 runs. England with this victory now have won 4 games out 4 and comfortably find themselves on top of the table. Pakistan were off to a slow start and lost the wicket of  S Ameen in the first over. They lost their second wicket for just 26 runs on the board. And matters got worse when Laura Marsh sent Muneeba Ali back to the dug-out for just 1. The score read that time was 3 for 27.  Soon Nahida Khan was bowled by Natalie Sciver and Pakistan were staring at a big defeat. All bowlers introduced into the attack had taken a wicket each. Marsh soon picked up her second wicket as Abidi was sent back to the dug-out for just 2 runs.FULL CRICKET SCORECARD: England Women vs Pakistan Women, 19th T20 Match, Group B, ICC Womens T20 World Cup 2016

Pakistan needed 108 runs off 72 balls with half their side back into the dug-out and it was an uphill task from there on. It was game over for Pakistan when Laura Marsh took yet another wicket as Brunt caught captain Sana Mir with Pakistan’s score read 6 down 48. England bowlers were completely on top of their game and the required run-rate was soon sky-high. Nida Dar was the next to go as Sciver added another wicket to her bag. Elwiss also took her first wicket as she caught S Nawaz off her own bowling. Pakistan were 67/8 at the time. The formalities were over in the 18th over.

Earlier, England Women set a target of 149 runs for Pakistan batting first. Charlotte Edwards top scored for England with 77 off 61 balls and remained not out. They were off to a flying start with 68 runs in 8.5 overs. But after losing wickets in succession England’s run-rate dropped from 9.5 to 6.5. Nida Dar was the most impressive of the Pakistan bowlers. She took three crucial wickets for Pakistan and ended with figures of 3-21. Asmavia Iqbal then took 2 consecutive wickets in the last over to restrict England to 148/5 in their 20 overs. 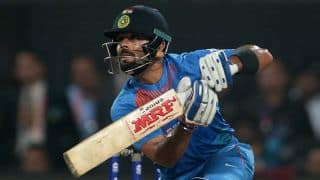