Australia’s coach and former left-hand batsman Matthew Mott has said that aggressive and well-planned strategy has helped the team to reclaim Women’s Ashes 2015. Australia had won the lone Test match and the ODI series 2-1 before losing the first T20. However, Mott says that in a healthy discussion after the disappointing result of first T20 made the players more eager and energetic to win the next match. A tactical approach was adopted targeting weaknesses of major batters of England which payed off. Australia dismissed England team to a meager 87 runs before posting 107 runs in their innings. READ: Women Ashes 2015: It’s nice to get our hands back on those Ashes, says Meg Lanning

In a conversation with cricket.com.au he said, “We spoke about making it sure it was World Cup final and not leaving it to wait for Cardiff. It was really important we played with that mentality because if we’re being completely honest, in the first game (in Essex) we were a little bit off the pace. Maybe because it was quite a while since the Test I think we were expecting us to turn up and play well but it wasn’t to happen. It was definitely a different mentality tonight. We were really disappointed with our batting in the first half. We thought we were at least 40-50 short of what par score was. As a group, we challenged them at halfway to make up for that and they responded extremely well which was amazing. It was quite a good wicket that. To keep them under that score and win by 20 runs was a fantastic achievement.”

Australia were in danger of losing the second T20 but they came back stronger in this match played at County Ground Hove. Ellyse Peery and Rene Farrell exhibited some brilliant fast bowling to bowl out the hosts 20 runs short of their target. They both swung the ball unpredictably with an occasional quicker ball which hit the deck perfectly. The English batters had no answer to Megan Schutt’s swing and occasional slower deliveries as well. Lydia Greenway was the highest scorer for England. She made 26 runs on 39 balls.

“Hindsight’s great, but at the halfway it was tough to find positives,” Mott said. But we made sure everyone went out there with that must-win attitude. We talked about leaving no stone unturned, to go out there and play as hard as we could, get in their face, build the pressure, take early wickets. And it went to script, 5-28 after six overs was probably better than we could’ve expected. Ellyse Perry up-front was unbelievable. Great presence, bowled extremely well, key wickets. And then Renee Farrell followed up extremely well and deservedly ended up with player of the match award. A really good all-round display. Our fielding, our intensity, it was like everything was on the line. We didn’t want to go to Cardiff having to win because we thought we’d played well in this series. We played one bad game the other day and thankfully it was only a bad half tonight,” Mott signed off. 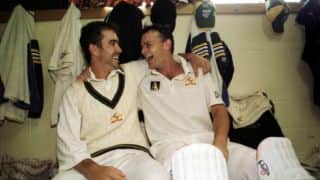 POLL: Does Cheteshwar Pujara deserve to regain his No. 3 spot?