Alyssa Healy returned to the XI and was named Player of the Match for the fourth time in a row this tournament.

Australia Women have qualified for the final of the 2018 ICC Women s World Twenty20, crushing the defending champions West Indies Women by 71 runs on Friday at North Sound. The win underlined the quality of the No 1-ranked team in Women s T20Is, who have lost just one match in the tournament en route to reaching Sunday final, and featured another match-winning performance from the in-form Alyssa Healy.

Healy was passed fit on match morning and top-scored with 46 off 38 balls, in the processing adding the highest partnership of the match with skipper Meg Lanning (31) as Australia put up 142/5 in 20 overs. The bowlers then turned in an outstanding performance, highlighted by Ellyse Perry s 2/2 to bowl out West Indies for 71.

Meg Lanning, the victorious captain, credited another all-round showing from the Southern Stars.

We were so ready for tonight’s game, we just had to turn up and we knew if we remained calm, we could get the job done, said Lanning. It’s a happy group at the moment, but we know we have one more to go. I thought we played well tonight. The conditions were tough for batting. Batting is certainly one of our strengths. Rachel Haynes did a great job to get us to the 140-run mark. I knew if we could pull back the run-rate and a few quick wickets, we could get the job done.

Healy had been in some doubt after suffering mild concussion during the loss to India Women last week, but was cleared after passing a fourth test and made an immediate impact to be named Player of the Match for the fourth time in the tournament.

You only get one brain and you use the downtime to get better. The pitch was really tricky, they left some fluffiness on the top and it was pretty difficult, said Healy. I was sure our bowlers would do the job. I have had glasses for the last six months but haven’t worn them on a cricket field; I can see a lot clearly now and might stick to wearing it in the future too.

“Not thinking too much of the final, we loved coming into this tournament and into this game as underdogs. It was an awesome atmosphere. Not too sure if we’d be sticking around here to watch the next game, we need to celebrate this win, get back into the dressing room and enjoy each others’ company.

Stafanie Taylor, the West Indies captain, apologised to the home fans for not making the final.

We let them get away in the last six overs – that was crucial, she said. Even though they got 142, as batsmen we just didn’t bat properly. Everyone is different I might have to ask them what affected them when I get back in the dressing room. We came into this game with a lot of confidence, but we just didn’t get going with the bat. I just want to thank the crowds in St. Lucia and Guyana for supporting us. Just one of those days – we’re sorry we couldn’t get over the line. 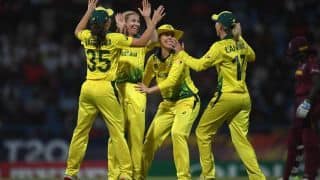 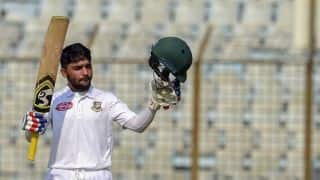