The Barmy Army gave Warner, Lyon and Starc a taste of the banter to come in England this month.

England‘s famous legion of cricket supporters, the Barmy Army, have made a tongue-in-cheek takedown of three Australian cricketers headed for the ICC Cricket World Cup 2019 on social media.

In a brutal potshot at David Warner, Nathan Lyon and Mitchell Starc, the Barmy Army posted on Facebook and Twitter Thursday a doctored image of the three players in their official World Cup kits, accompanied by a sarcastic caption that stated: ‘The Australia squad look ready for the ICC Cricket World Cup 2019!’.

In the image, Warner is pointing at the wording on his yellow jersey, but the word ‘Australia’ has been Photo-shopped to read ‘Cheats’ in reference to the ball-tampering scandal in a Test in South Africa last year, for which Warner served a 12-month ban.

In the same image, the Barmy Army Photo-shopped Nyon and Starc holding rolls of sandpaper.

Justin Langer, Australia’s coach, responded to the social media troll post by stating that the team is ready for anything the Barmy Army has to throw at them.

Warner, 32, linked up with Australia’s World Cup squad last week after he amassed 692 runs at an average of 69.2 and strike-rate of 143.86 for Sunrisers Hyderabad in the IPL.

Starc this week returned to the team after three months on the sidelines with injury.

Many current and former England players believe this is the best chance for the hosts to win a World Cup. 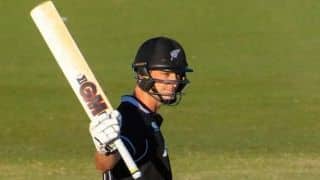 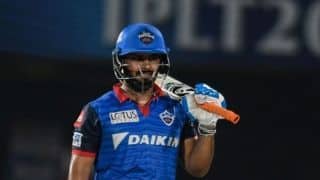