The BCCI went ahead with Karthik and decided to omit Pant as the reserve wicketkeeper from India s 15-member World Cup squad.

The decision to give Dinesh Karthik a nod for the 2019 World Cup ahead of Rishabh Pant was based on experience and polished wicketkeeping skills, as per BCCI s chairman of selectors MSK Prasad. The BCCI went ahead with the veteran Karthik and decided to omit Pant as the reserve wicketkeeper from India s 15-member squad for the World Cup which was revealed on Monday.

Karthik s inclusion ahead of the young Pant did stump a few, considering the fact that the 34-year-old wicketkeeper batsman had been left out of India s five-match ODI series against Australia last month which the home team had lost 2-3. Pant had played just two matches and tallied 50 runs.

Overall, the 21-year-old has represented India in just five matches, debuting against the West Indies last October and has 93 runs from four innings. His numbers are a stark contrast to Karthik s experience of 1738 runs from 91 ODIs.

“Definitely a case where we debated in length. One of them [Pant or Karthik] will play in the XI [if] MS [Dhoni] is injured. So under such situations, in crunch matches, who is the best guy who can handle the pressure? That is the reason that went in favour of Dinesh Karthik,”Prasad said after the squad was announced.

“Pant is full of talent. There’s a lot of time for him. It’s just unfortunate that he’s missed out. Under pressure, we have seen Dinesh Karthik finishing matches. That scored for him.”

The other big omission from the squad was that of Ambati Rayudu, whom skipper Virat Kohli has backed as India s No. 4 at the beginning of Asia Cup last year. Since last September, Rayudu has scored 639 runs from 21 innings with four half-centuries and one hundred. He recently scored an unbeaten half-century against New Zealand in the fifth ODI in January, a series which also consisted a couple of 40-plus scores from him.

With Rayudu out, the selectors backed allrounder Vijay Shankar to probable fill in at No. 4. The BCCI also hinted at slotting KL Rahul in the middle order if needed.

“After the Champions Trophy [in mid-2017], we have tried quite a few middle-order batsmen, which also includes Dinesh Karthik at that order, and we also tried Shreyas Iyer and Manish Pandey. We did give a few more chances to Rayudu but what Vijay Shankar offers is three dimensions,” Prasad said.

“Apart from his batting, he can bowl. If the conditions are suitable, overcast, which we might encounter in England, he might bowl a bit and he’s a fantastic fielder. That’s the thing that went in favour of Vijay Shankar. We are looking at him at No. 4 and with Dinesh Karthik and Kedar Jadhav in, we have plenty of options at that No. 4 slot right now.” 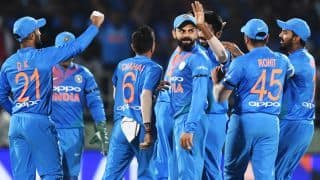 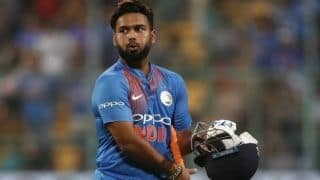