In the build-up to the 2019 ICC Cricket World Cup, CricketCountry brings to you the most memorable moments and matches from the tournament over the years right from its first edition, way back in 1975. With 26 days to go, in our latest World Cup Countdown, we rewind to March 2, 2011, when Ireland stole England’s thunder, courtesy a stunning Kevin O’Brien hundred at the M Chinnaswamy Stadium in Bengaluru during the World Cup 2011.

During the 2011 World Cup in India, there was a raging debate on the inclusion of minnows in the big league. Ireland are, by far, the best side amongst the weaker teams and can challenge the best on their day. Going into their game against England, they needed to make a statement on behalf of the minnow world. Not many would have fancied their chances, but would have been wary of their copious potential and a giant killing tendency.

England won the toss and elected to bat first on a belter at the M Chinnaswamy Stadium, Bangalore. Kevin Pietersen, Jonathan Trott and Ian Bell hit fifties to guide England to 327 in their allotted 50 overs. Ireland had a decent batting line-up, but a score beyond 300 looked a monumental task.

The Ireland run-chase got off to the worst possible start as captain William Porterfield dragged the first delivery of the innings onto his stumps. Paul Stirling, Ed Joyce and Niall O Brien fought hard with a few cameos, but the asking rate kept rising. After the 20th over, England suddenly took control of the game with a few wickets to have Ireland reeling at 111 for five with Kevin and Alex Cusack in the middle.

At that stage, the result looked obvious and Ireland s chances were dimming by the minute. However, Kevin had other ideas as he decided to have some fun and pump some life into the game. Graeme Swann was all over the Irish batsman and Kevin started by attacking him and Michael Yardy. He was ready to give it everything with a full flurry of the bat. If they pitched it around leg stumps, he would swing it towards the on-side. The flashing blade would also come down hard on anything outside off.

Kevin s first six came off Swann in the 27th over when he slog-swept one to mid-wicket. A ball later, he essayed the same stroke for maximum. He was off and running with Cusack providing solidity at the other end. England were getting edgy even though the equation was still in their favour. A flurry of boundaries unsettled the rhythm of their bowlers. In the 30th over, Cusack and Kevin brought up their 50 run partnership coming off only 31 balls. With 20 overs to go, they needed 162 to win.

Sensing the opportunity, the batsmen decided to opt for the Batting Powerplay after the 31st over. The English bowlers were feeling the heat and this was to disturb them further. Moving across the crease, Kevin created doubts in the minds of the bowlers and swung hit bat when the ball was in his zone. James Anderson was carted over square leg for a well-timed six as he brought up his fifty off only 30 balls. Lady Luck also smiled on him as the edge flew past the wicketkeeper on the way to the boundary.

In between all those brushes with fate, there were some remarkable strokes. The supposed minnow played with the audacity of an established star as he lofted Tim Bresnan over extra-cover for a massive six. The fielders could do nothing but watch as Kevin either cleared them or bisected the gaps between them perfectly.

The Powerplay changed things completely as Ireland needed only 99 runs in the remaining 14 overs. Kevin and Cusack had milked 62 runs off those five overs almost as if there was a free lunch on offer. The fast-bowlers were treated with disdain as he wafted the bat across the line and belted them over the leg-side for massive hits. Cusack took a page out of his partner s book and started upping the ante. England didn t help their cause as their catching was poor with a few chances spilled in the field.

Amidst the mad rush, Kevin was closing in on the fastest hundred in a World Cup game. On 98, he turned Yardy for a couple to spark of celebrations in the Irish camp. The hundred had come off only 50 balls the fastest in a World Cup. Such was the carnage that Ireland needed only 56 off the last nine overs. An upset was on the cards as the tables had turned dramatically. However, there was more drama as Cusack was run-out after a patient hand. John Mooney walked out to join Kevin with an eye on history.

Kevin slowed down after the hundred, intent on seeing Ireland through. The hard work had been done and it was about holding their nerve. As he went into that mode, Mooney kept the asking rate under control with a boundary almost every over. The England bowlers watched hopelessly as even the edges were going for fours.

It came down to a run-a-ball for Ireland in the last two overs, when Kevin was run-out trying to convert a single into two. England were still alive, but the Irish were in high spirits. Kevin walked back to a rousing ovation for his remarkable effort of 113 off 63 deliveries. The crowd had witnessed something special as this knock had converted a hopeless situation into a possible upset. Out came the veteran Trent Johnston and he smashed his first ball through the overs for a boundary to ease the nerves. With three needed off the last over, Mooney smashed the first ball through mid-wicket to create history.

While England skipper Andrew Strauss, who was celebrating his birthday on the same day, would have hoped for a win as a birthday gift, Ireland spoilt his and England s party to snatch a remarkable win after being reduced to 111/5. 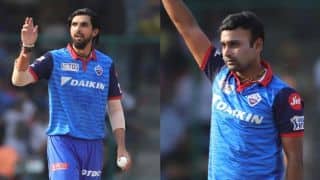