Importantly, under coach Gary Kirsten, India has developed a mentality of winning when the chips are down. They don t cave in as easily as before and clinch victory from seemingly hopeless situations. They aren t pushovers overseas. 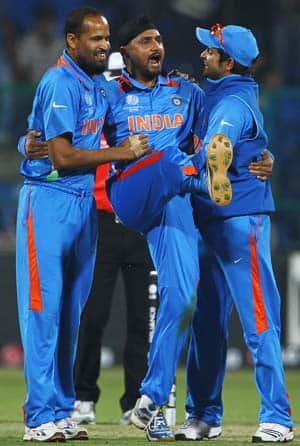 Importantly, under coach Gary Kirsten, India has developed a mentality of winning when the chips are down.

‘Favourites is a tag that has never sat well with Indian cricket teams. But in the build-up to the 2011 World Cup, this current side has been tagged as precisely that. The reasons are justified, to an extent: the batting is loaded, the bowling balanced, they are playing at home and then there are the examples of how this side has made rapid strikes in international cricket.

Importantly, under coach Gary Kirsten, India has developed a mentality of winning when the chips are down. They don t cave in as easily as before and clinch victory from seemingly hopeless situations. They aren t pushovers overseas. They fight till the end. They actually win tournament finals. Though Kirsten s role has been far more important and evident in the Test format, it s easy to see the winning mentality that the players have inculcated in the 50-over game.

India has a fabulous batting line-up. At the top they are loaded, with Virender Sehwag and Sachin Tendulkar opening. If India has to scale the summit and justify the confidence that a nation is putting on its heroes, then the success of Tendulkar will be very, very crucial.

Gautam Gambhir follows at No 3, and the men who follow can either post or chase down big total. Virat Kohli, who owns the second spot in the ICC ODI batsmen rankings on the back of several successful series, has been tipped by Mahendra Singh Dhoni to slot in at No. 4, followed by Yuvraj Singh, the captain himself, and Yusuf Pathan. Suresh Raina, a proven match-winner, but who has managed just one half-century in his past 21 innings, looks likely to fulfil 12th man duties as the tournament gets under way. But what a 12th man to have!

The big question mark is the ability of the bowlers to hold it together when they are attacked in the Powerplays; it won t take much to recall how a failure to remain composed cost India in the 2003 World Cup final as well as against Bangladesh infamously and Sri Lanka in 2007. Zaheer Khan and Ashish Nehra aren t as sprightly as they were in 2003, and Munaf Patel is also four years older than since the terrible Caribbean outing, so the job won t be any easier unless these three bowl well.

India’s batsmen and bowlers will have to score/save the 50 extra runs they concede/fail to score if they are to give themselves a chance of making it to the semis, but they can be expected to.

A cursory glance at India s ODI record in the countdown to 2011 makes for confident reading. They played two bilateral series at home, beating Australia 1-0 in a rain-marred contest and New Zealand 5-0, and lost 3-2 in South Africa with a depleted side. Considering that India had only once beaten South Africa in South Africa before they took a 2-1 series lead last month, the result of the last contest was pretty positive.

But all that will amount to little once India take the field against Bangladesh in Dhaka on February 19. World Cup 2011 doesn t get any bigger for India. This is a massive tournament for them, considering their woeful performance in the 2007 event in the Caribbean and the fact that they are co-hosts, with the final to be held at the Wankhede Stadium in Mumbai. As Ian Chappell pointed out recently, no team has ever won the trophy playing in a home final but India have a great chance of breaking that sequence.

When your probable batting line-up reads Tendulkar, Sehwag, Gambhir, Kohli, Yuvraj, Dhoni, Pathan, and your 12th man is Raina, it s obvious what your strong suit is.

The bowling and fielding is susceptible. India has often folded under pressure in World Cup scenarios and the stakes are at an all-time high this time around. More than on the field, it s in their heads that the Indians need to be their sharpest.

Never mind a 5-0 sweep of New Zealand at the end of 2010, India without Dhoni are not the same side. This side needs Dhoni the batsman as much as Dhoni the ice-cool leader, especially in the pressure-cooker scenario of a home World Cup. Dhoni s one-day batting average has slipped from somewhere in the mid-50s to 48.80 over the past season, but it remains indicative of just how good a batsman he is in the format. Personally he was disappointing against South Africa, and overall did not enjoy a very good 2010 with the bat in ODIs, but Dhoni goes into the World Cup fired up and ready for any challenge. And he ll surely be aiming at becoming the second Indian captain to lift the World Cup.

Sachin Tendulkar has a point to prove after India s first-round exit in the 2007 World Cup, a memory he termed the worst of his 21-year career. In the form of his life in Test cricket, and undoubtedly buoyant about his limited-overs mind-set having scored ODI cricket s first double-century last year and scorching IPL 3, Tendulkar is a level of confidence and fluidity not seen by many batsmen at the end of their careers. It bodes ominously for opposition bowling attacks.

Yusuf Pathan goes into his first World Cup with 318 runs at an average of 79.50 in his last two series which spanned just five innings and a career strike-rate of 115.09 shows an explosive quality like few others in the game. Enjoying a splendid run of form in his latest avatar in the Indian side, Pathan will be relied upon to add 30 runs to a total and take India over the finish line. That s a tough ask, but recently Pathan has shown he s capable. Also a handy off-spinner, he could be more important than we envision.

CricketCountry verdict: A very good one-day side, India have the ability to make it to the semi-finals. This remains their best shot at the title in some years, given the strength of the batting and the belief inside the team. The bowling has some question marks hanging above it, and they may come unstuck in the semi-finals.