The addition of Luke Ronchi and Mitchell McClenaghan has completed the World XI squad which would be led by Eion Morgan against West Indies.

The additions of Luke Ronchi and Mitchell McClenaghan have completed the World XI squad against West Indies. The tea, will be led by Eoin Morgan. The charity T20I match, to be played at Lord’s on May 31, is a fundraiser for restoration and renovation of five venues in the Caribbean Ronald Webster Park in Anguilla, Sir Viv Richards Stadium in Antigua, Windsor Park Stadium in Dominica, AO Shirley Recreation Ground in BVI and Lumber Ball Park in St Maarten. All five grounds damaged by Hurricanes Irma and Maria to varying degrees late last year.

McClenaghan is currently playing the Vivo IPL 2018 for Mumbai Indians (MI). He has so far picked 11 wickets in 8 matches. He plays a vital role in bowling during the Powerplay overs. Ronchi, on the other hand, was the most run-scorer in the Pakistan Premier League 2018 with 438 runs in 11 matches. They, along with Morgan, will be the only non-Asians in the squad.

Talking on the match, Ronchi said: I m looking forward to being a part of the World XI at Lord s for the charity match against the Windies on the 31st of May, that will be raising funds to help with the rebuilding of cricket venues which were damaged by the two hurricanes in the Caribbean last year. It is all for a worthy cause and it feels really good to see so many cricketers from different countries come together for such a reason. To be playing a match which will see some of the very best in action together is a matter of great pride for me. I m looking forward to seeing a packed house at Lord s, supporting the relief effort, and an exciting game of cricket.

McClenaghan, too, expressed keenness: This will be a fantastic spectacle and I’m looking forward to participating with a great bunch of guys and look forward to doing those who will benefit from this match proud.

The match has been granted international status by the ICC. Carlos Brathwaite will lead the West Indies side which includes big names like Chris Gayle, Marlon Samuels, Samuel Badree and Andre Russell. 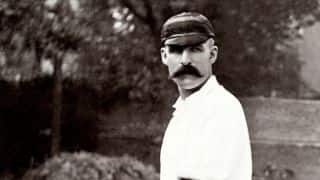