Pakistan trail by a further 138 runs in their second innings with seven wickets in hand.

Paceman Nuwan Pradeep took two wickets to leave Pakistan fighting to avoid defeat on the third day of the second Test against Sri Lanka in Dubai .

The right-arm fast bowler had Mohammad Hafeez (one) and Khurram Manzoor (six) in his hostile first spell before Pakistan reached tea at 85 for 3, still needing another 138 runs to avoid an innings defeat and going 1-0 down in the three-match series.

The first Test ended as a draw in Abu Dhabi last week.

Experienced batsman Younis Khan (41) and Misbah-ul Haq (27) were at the crease, having added 66 runs for the unbroken fourth-wicket stand in Pakistan’s last hope for safety.

Pradeep, who took a career best 3 for 62 in Pakistan’s first innings of 165, had Mohammad Hafeez caught behind in his second over and in his fourth swung one across Manzoor for wicketkeeper Prasanna Jayawardene to take his seventh catch of the match.

Pakistan had lost opener Ahmed Shehzad in the last over before lunch, caught behind for nine off spinner Rangana Herath.

From 19 for 3 it was left to Younis and Misbah to repair the damage. Misbah completed his 3,000th Test run when on 10, becoming Pakistan’s 15th batsmen to achieve the milestone.

The Pakistan captain survived one leg-before referral on one and twice on close catches behind the wicket, once off a miscued hook which went to the boundary. He has so far hit three boundaries and a six.

Earlier, Mahela Jayawardene hit a fighting 129 and when on 117 became the eighth highest run-getter in all Test cricket, surpassing Australia’s Steve Waugh’s 10,927 in 140 Tests. Jayawardene now has 10,940 in 140 Tests.

Resuming at 318 for four, Sri Lanka lost skipper Angelo Mathews, caught behind by wicketkeeper Sarfraz Ahmed off paceman Rahat Ali in the second over of the day, without adding to his overnight score of 42.

Mathews, man of the match in the drawn first Test in Abu Dhabi for his 91 and 157 not out, hit five boundaries during his 88-ball knock.

Mahela Jayawardene’s brilliant knock ended when he was bowled while trying to reverse sweep Saeed Ajmal.

Jayawardene batted resolutely for 423 minutes and hit 15 boundaries in an innings which gave Sri Lanka the crucial lead. Ajmal’s wicket came in his 29th over and he took one more in the end to finish with 2 for 56 in 34 overs.

Left-arm paceman Junaid Khan finished with the best figures of 3 for 102, removing Prasanna for nine. 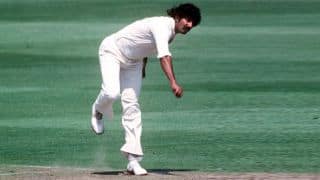 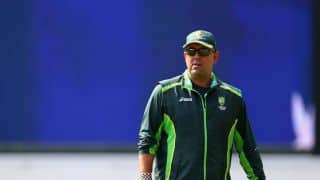