On a day when Kevin Pietersen bowled eight overs in his game against South Africa, Robin Peterson grabbed three in the England game, Yuvraj Singh continued the trend by picking up his first five-wicket haul for the India. 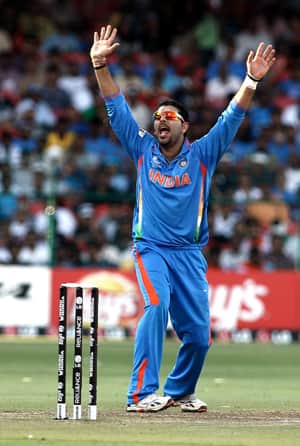 Yuvraj Singh of India appeals successfully for LBW against John Mooney of Ireland in the Group B match at Bengaluru.

On a day when Kevin Pietersen bowled eight overs in his game against South Africa, Robin Peterson grabbed three in the England game, Yuvraj Singh continued the trend by picking up his first five-wicket haul for the India. As a result, India overcame a second successive ordinary bowling performance by Piyush Chawla to bowl Ireland out for 207 in the 48th over at the M Chinnaswamy in Bangalore.

It was a decision that probably incited debate amongst the experts but Mahendra Singh Dhoni s decision to field first was probably based on the previous couple of games played at this venue. Chasing under the lights has been easier at Bangalore because of the slight sprinkling of dew on the pitch, which has made the ball come onto the bat much quicker.

Zaheer Khan had one dropped off William Porterfield s edge but he soon reduced the Irish side to 9 for 2. Paul Stirling looked befuddled by the one that came back in whereas Ed Joyce inside-edged one to the wicket-keeper.

The tide turned for Ireland through a third-wicket stand between captain Porterfield and Niall O Brien, both of who looked untroubled for most part of the innings. Such was their domination of the Indian spinners who came on earlier than Dhoni is used to getting that there were more than a few worried Indian players on the field. While there weren t too many misfields through the partnership, the lack of intensity was there for everyone to see.

Chawla s spell had a lot to do with this. Brought on in the 18th over, Chawla went for five no-balls and a six off the next delivery and it all went downhill for him from there. For Ireland, this was a shot in the arm as they carried their stand on further to add 113 runs for the third wicket.

The flagging bowling was given a boost in the field through a run-out. Virat Kohli swooped on a stroke by Porterfield and had Dhoni whipping out the bails, finding O Brien short. By this time, Yuvraj had also begun his spell and his slow, loopy spin and some that did not spin had the Irish muddled.

Andrew White, who had missed the previous game lasted all of 10 balls before edging one to Dhoni while the last game s hero Kevin O Brien had barely managed to get going when he scooped one back to Yuvraj.

It did not stop there. Yuvraj followed this up with the vital dismissal of Porterfield, who after surviving that initial dropped chance overcame his form-issues to strike a 104-ball 75. It was probably one of the worst ball of the spell from Yuvraj, short and wide, but the Irish captain only managed to cut it straight to the short extra-cover fielder.

The last two that Yuvraj got were through reviews. John Mooney was declared lbw, and the DRS upheld the appeal while Alex Cusack wasn t but despite being more than 2.5 meters from his stumps, the umpire overturned the not-out to give Yuvraj his first five-for.

After looking good at 122/2 at one stage, Ireland had collapsed for the addition of only 85 more runs.

The final total would probably please India, but it hardly did enough to paper over the poor bowling exhibited in the middle of the innings. Chawla ended with eight fruitless overs for 56 runs while Harbhajan, despite being economical, did not get a single wicket in his nine.