Former ICC President and Pakistan Test captain Zaheer Abbas is confident that his nation will witness the return of international cricket soon. No major test playing nation has toured Pakistan after the terror attack on in Gaddafi Stadium in Lahore in 2009, where Pakistan were playing a Test against Sri Lanka. The match and the rest of the tour was called off, with a few Sri Lankan players returning home wounded. Only Zimbabwe toured Pakistan for a short three One-Day International (ODI) series last year, which were once again played in Lahore. The Pakistan Cricket Board (PCB) has taken a lot of steps to revive international cricket in Pakistan, but have not been successful thus far. READ: Zaheer Abbas wants resumption of ties between India and Pakistan

“I do not want to predict a time frame of international teams touring Pakistan, but I do hope over the next 2-3 years we could see them playing back in Pakistan,” Abbas said. “When I used to sit on international forums as ICC president I used to talk a lot about it [cricket in Pakistan], but people didn’t want to come due to their security concerns.” “Pakistan has a very strong team and it is very important member of ICC,” said Abbas, who scored a century of centuries in first class cricket. “Without Pakistan cricket, the world of cricket is not complete. The government and people also want the cricket to come back to Pakistan,” Abbas said according to firstsport.com.

Pakistan have since played all their home matches in the UAE, where the attendance has been less, especially for Tests. The attendance was low for the recently concluded Test series between Pakistan and West Indies as well. “At the moment our main grounds are in UAE, but you must have noticed in test cricket only handful of people watched matches and you can realize how important it is to revive cricket back home,” Abbas said. “We play on the other side of the world and host international teams for months, financially it also hurts us. Cricket grounds [in UAE] demand so much money that I can’t tell. I just pray that there’s peace in Pakistan and foreign teams themselves say that they wanted to play in Pakistan,” he added. READ: Zaheer Abbas laments poor state of Pakistan cricket

Abbas is however impressed with the way Pakistan have risen in the ICC Test rankings, recently rising to the No. 1 status as well. “There’s no international cricket in Pakistan and despite that we became No 1 and now No 2. It clearly shows how much depth we have in our test team,” Abbas said. 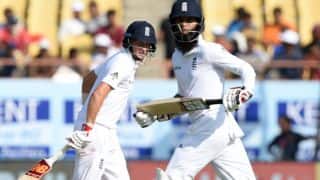