Zimbabwe chased the 286-run target set by UAE with two overs to spare.

Zimbabwe beat United Arab Emirates (UAE) by four wickets during their ICC Cricket World Cup 2015 Pool B clash at the Saxton Oval in Nelson on Thursday. The Zimbabweans chased the 286-run target set by the UAE with two overs remaining, with Sean Williams and Elton Chigumbura batting on 76 and 14 respectively, with Zimbabwe managing to catch up in terms of points in the tournament table, as well as continuing their good run of performances after defeating Sri Lanka in the warm-up round and putting up a terrific fight against South Africa in the Pool A opening game. Zimbabwe earned two points as a result, moving to the fourth position in Pool B after the hard-fought win. Full scorecard

Zimbabwe began the chase of the daunting target on a slow note, with openers Sikandar Raza and Regis Chakabva collecting a mere 14 runs in the first five overs. Mohammad Naveed and Ajmad Javed opened the bowling for UAE, and were doing a fine job in maintaining line and length, as well as maintaining pressure on the opponents.

The Raza-Chakabva pair eventually began to get the runs along the way, eventually bringing up the 50-run opening stand in the 10th over. The partnership was beginning to cause anxiety to the UAE players when Raza got dismissed while attempting to play a cut shot off the bowling of opposition skipper Mohammad Tauqir, getting caught at backward point by Krishna Chandran. ICC Cricket World Cup 2015: SCHEDULE & MATCH DETAILS

Zimbabwe were perhaps dealt their biggest blow yet when star batsman Hamilton Masakadza was dismissed on a score of one after facing just four deliveries. Masakadza, who had top-scored for Zimbabwe with a knock of 80 during Zimbabwe’s opening game against South Africa at Hamilton, was trapped plumb off the bowling of Amjad Javed.

Chakabva, who was brought in as a replacement for Chamu Chibhabha, formed a useful 40-run partnership with wicket-keeper batsman Brendan Taylor. He was batting on 35 off 62 balls when he accidentally slipped while trying to play a backfoot defensive shot, resulting in his left foot sliding onto the stumps. Taylor was batting three runs short of a half-century when he was dismissed by Nasir Aziz. ICC Cricket World Cup 2015: Complete Coverage

Zimbabwe appeared to be in a state of trouble when they were trailing at a score of 167 for five, with Solomon Mire becoming Mohammad Naveed’s first, and only wicket of the innings. Sean Williams and Craig Ervine’s presence at the crease however, turned out to be the blessing that the Dav Whatmore-coached team was desperately looking for. The pair added 83 for the sixth wicket, with Williams bringing up his 18th ODI fifty. Williams ensured Zimbabwe’s journey across the winning line was a safe one, even after the dismissal of Ervine. Williams scored the winning runs in the form of a boundary off the last ball of the 48th over. Read: UAE innings report

Man of the Match: Sean Williams 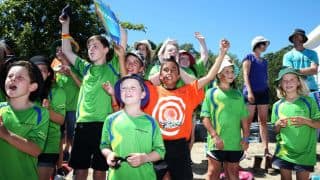 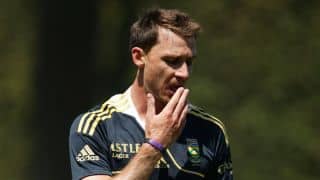