As Zimbabwe receive a whitewash from India at home in the three-match One-Day International (ODI) series, Zimbabwe captain Graeme Cremer said that the hosts are motivated to pull off a better job in the upcoming Twenty20 International (T20I) series. MS Dhoni, who led a young Indian team with very few experienced players and thrashed Zimbabwe 3-0 with total domination, will be eyeing a similar result in the forthcoming three-match T20I series starting from Saturday. However, the positive for Cremer is the fact that Zimbabwe won the last T20I that India played there at their den and said that the fact is motivating the team to do well. READ: Bumrah, Rahul, Fazal star in IND’s win; complete whitewash

Talking to Cricbuzz, Cremer said, “I suppose it’s just a mindset of T20 now. We don’t have to worry about losing wickets or whatever. We’ve just got to be positive. Maybe this T20 series is just what we need to get back into the positive frame of mind. We won’t talk too much on the series now. It’s gone. If we had nothing now for the next month, we could dwell on how we can improve. We know we’ve got T20s this coming weekend. We’re not going to reflect too much on the one-dayers, we are just going to look to hit the ground running in T20s. We’re going to try our best to turn things around, there’s not much else I can say to that.”

The newly appointed Zimbabwe captain then highlighted the latest win factor. “I think it’s motivating enough that the last T20 we played against India here is (the one) we won. It’s motivating enough knowing how it felt when we won the last time, how good the crowd was and how we enjoyed that. Guys are looking forward to doing well and obviously having a disappointing one-day series makes us even more motivated to do well in the T20s.” 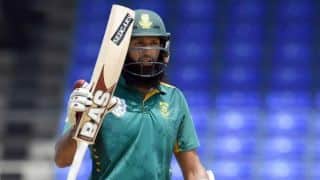