The milestone of 200 came up off Zaman s 148th delivery faced with a slash over the covers that beat the boundary rider.

Fakhar Zaman has become Pakistan s first double-centurion in ODI cricket, eclipsing Saeed Anwar s 21-year-old mark of 194 with a stroke-filled 210* against Zimbabwe during the fourth ODI in Bulawayo.

The Pakistan opener s historic innings came off 156 deliveries, featured 24 fours and five sixes and helped fashion the first 300-run opening stand in ODI cricket, alongside Imam-ul-Haq (113) with whom he put on 304 in 42 overs on Friday. This whirlwind partnership also pushed Pakistan to their highest ODI total of 399/1, surpassing the 385/7 scored against Bangladesh in 2010.

The milestone of 200 came off Zaman s 148th delivery as he slash one over the covers for a four, and was celebrated by a glance skywards and a kiss of the helmet in front of a standing Pakistan dressing room.

Zaman, 28, has enjoyed a bumper tour of Zimbabwe. During the T20I tri-series also featuring Australia, he was Player of the Tournament for scoring 278 runs in five innings as Pakistan won the title. In four ODIs with Zimbabwe, he has reeled of scores of 60, 117*, 43* and now 210*. Stunningly, this double-century has come in his 17th ODI. 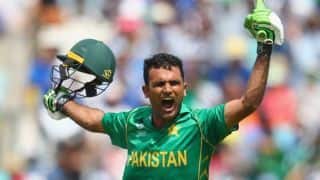