Rangana Herath removed Brian Chari and Hamilton Masakadza in consecutive overs to reduce Zimbabwe to 33 for two at tea on the fourth day.

Rangana Herath struck two early blows as Sri Lanka began their final push for victory in the second Test against Zimbabwe at Harare Sports Club on Wednesday. Herath removed Brian Chari and Hamilton Masakadza in consecutive overs to reduce Zimbabwe to 33 for two at tea on the fourth day, as the hosts went in search of an unlikely 491 runs for victory. With four sessions remaining in the match, Sri Lanka remained on course to sweep the two-match series, having won the first Test by 225 runs. The tourists began the fourth day on 102 for four in their second innings, with an overall lead of 334, and spent the first half of the day extending that advantage. Live Cricket Scorecard: Zimbabwe vs Sri Lanka 2nd Test at Harare

With Dimuth Karunaratne anchoring the innings with a patient 88 and Kusal Perera adding a quickfire 62 towards the end, Sri Lanka were able to declare their second innings on 258 for nine to set Zimbabwe 491 to win. Although they were unable to claim 20 wickets for an eighth straight Test match, Zimbabwe s bowlers were able to slow Sri Lanka s scoring in the first session, then picked up wickets when the visitors went on the attack after lunch. Leg-spinner Graeme Cremer finished with figures of 4 for 91 after taking three late wickets, while fast bowler Carl Mumba took 3 for 67.

Left with 136 overs to bat in order to save the match, Zimbabwe saw Chari bowled by Herath in the eighth over of their innings, before the left-arm spinner trapped Masakadza lbw in his next over. Before heading for Lunch, Karunaratne closed in on a second century in as many Tests as Sri Lanka s lead passed 400 on the fourth morning of the second Test. Although Zimbabwe s bowlers were able to restrict the Sri Lankan scoring in a slow session, Karunaratne s unbeaten 86 took his side to lunch on 177 for five, giving them an overall lead of 409. Sri Lanka began the penultimate day of the series, which they lead 1-0, on 102 for four and found the going tough early on.

Fast bowler Chris Mpofu started his day with six straight maidens, and the tourists scored just 33 runs in 15 overs before the drinks break. Donald Tiripano then broke a 69-run stand for the fifth wicket when he trapped Asela Gunaratne lbw for 39, but Karunaratne was immovable and was joined by wicketkeeper-batsman Kusal Perera, who went to lunch on 10 not out. 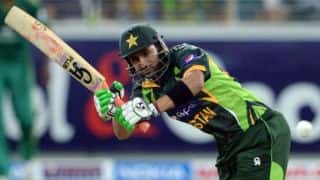