When the Master Blaster and the Little Master get captured in one frame, it surely turns into a special one.

When the Master Blaster and the Little Master get captured in one frame, it surely turns into a special one. Viv Richards and Sunil Gavaskar were men who made batting look good and filled stands in the 1970s and 80s. While Richards was an out-and-out explosive batsman, who could tear apart any bowling attack, Gavaskar had the ability to wear out the best with his strong defence. Both had contrasting style but one thing was same, their appetite for runs.

While Richards was among the finest of his era, Gavaskar is regarded as one of the greatest openers of all time. Both these legends are a part of the commentary team in the India-West Indies Test series. The first Test is being played at the Sir Vivian Richards Stadium at Antigua. In the above picture tweeted by West Indies Cricket’s official account, we see both these legendary figures analysing the progress ahead of Day 3. Also Read: Why West Indians are not “bothered about the watch?” Viv Richards explains

What happens when you end up idolising both these gentlemen with contrasting style? You become Sachin Tendulkar, well not always. Tendulkar during his growing up days idolised both of them. No wonder, he developed the best mix of solid technique and aggressive play unlike any other. 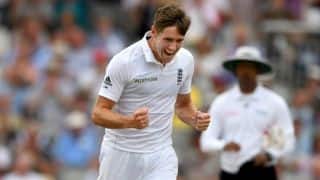 England on top as Chris Woakes’s 3-for downs Pakistan at stumps on Day 2, 2nd Test at Old Trafford