A dawn of new era

A dawn of new era

It makes for a rare view; with international cricketers in whites playing under the lights and a huge crowd in attendance.

The historic Day-Night Test that began today between Australia and New Zealand at the Adelaide Oval marks the beginning of a new era for Test cricket. For the first time in the 138-year old history of Tests, a pink ball is being used for playing. Also, first time ever a dinner break was taken instead of lunch break.

Earlier, there were speculations that certain players had apprehensions regarding the visibility of the ball, but all apprehensions were put to rest as the teams took field. As a matter of fact, both the teams relished being a part of this historic Test.

On the evening of the match, when the floodlights were turned on, the above picture was taken. It makes for a rare view; with international cricketers in whites playing under the lights and a huge crowd in attendance. The weather stayed clear for this historic match, as it can be seen in the picture. On the whole, by the initial look of it, the Day-Night Test cricket is here to stay. 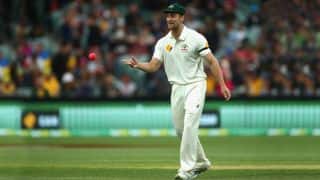