It’s a joyful moment for any fan as it portrays the dedication and concern of the players towards their country and people.

Cricketers enjoy tremendous fan following and have a tendency to draw massive attention towards any sensitive issue in the society. Polio is one of the dreadful diseases known to mankind and the efforts made to eradicate it from the society have been useful thanks to some advance medical usage. Polio drops are given to toddlers which help them to build a resistance to fight the disease.

In the picture above, which was posted by Atta Nasib, Afghanistan cricketers are seen hunting a boy in the streets who refused to take his quota of polio drops. It’s a joyful moment for any fan as it portrays the dedication and concern of the players towards their country and people. Also Read: Do Afghanistan deserve Test cricket status more than Zimbabwe?

Afghanistan cricket have done well in the recent times and scaled newer heights. On this occasion, they have certainly won millions of hearts and contributed towards the society. A true sportsman spirit is not just shown on the field but also off it. 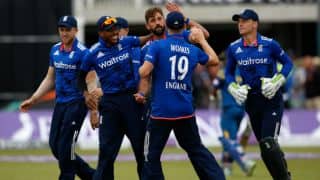 Chris Woakes, Liam Plunkett scalp 3 wickets each as England restrict Sri Lanka to 248 for 9 in 3rd ODI at Bristol