Australia's one of the greatest fast bowler Glenn McGrath got married with Sara Leonardi on November 18, 2010.

Australia’s one of the greatest fast bowler Glenn McGrath got married with Sara Leonardi on November 18, 2010.

The couple first met during the second edition of Indian Premier League (IPL) in 2009. Sara is an interior designer and is McGrath’s second wife. McGrath’s first wife Jane passed away in June, 2008 after a long battle with breast cancer. Earlier that year, both Glenn and Jane were made the members of the Order of the Australia in January 26. In 2002, Glenn and Jane founded McGrath Foundation, a breast cancer support and education charity in Australia.

Sara has been a pillar of strength for McGrath, as she proved to be the right partner as well as a good mother for his children James 15 and Holly 13. She also wrote a book named Stepmother Love on April 1st of 2014. Sara is an US-born Italian and in an interview last year, she said that McGrath’s kids welcomed her with open arms.

McGrath announced retirement from Tests on December 23 in 2006. In 2007 he played his last Test against England during the Ashes in Sydney. After 2007 Cricket World Cup, he further retired from all forms of international cricket. He was the player of the series in the World Cup final. A year later he was brought by Delhi Daredevils for a sum of 1.4 crore in the first season of IPL.

The Aussie legend has played 124 Tests and 250 One-Day Internationals (ODI) for Australia, out of which he took 563 wickets in Tests and 381 in ODIs. In January 2013 he was inducted into the ICC Hall of fame. 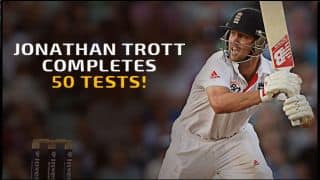