Imran Khan, his son and Arjun Tendulkar captured in one frame

Imran Khan, his son and Arjun Tendulkar captured in one frame

Young Arjun was seated next to Imran and his son and was seen enjoying Pakistan’s bowling on Day 2 of the ongoing Lord's Test.

There can’t be a bigger start to Pakistan’s cricket season, as the team kicked off their tour to England with the first Test at Lord’s getting underway on Thursday. Though the match was already a much anticipated one due to the comeback of pacer Mohammad Amir at the scene of crime six years later, when it did start, a Misbah-ul-Haq special made it all the more special for Pakistan. ALSO SEE: With Lord’s hundred and 10 push-ups, Misbah-ul-Haq keeps his promise to Pakistan arm.

Pakistan skipper’s maiden Test ton in England at the age of 42 was a spectacle, and to witness it, the who’s who of Pakistan cricket were present at the home of cricket. On Day 2, Pakistan’s greatest captains ever and a leading politician Imran Khan was in attendance on the ground. The legendary all-rounder was present with his younger son Qasim at the venue and the two had a nice time watching Pakistan bowl. ALSO READ: Why Arjun Tendulkar’s selection is right ahead of Pranav Dhanawade.

However, what made the moment more special was presence of another legend Sachin Tendulkar’s son at the venue. Young Arjun was seated next to Imran and his son and was seen enjoying Pakistan’s bowling. Arjun, who plays cricket and bowls left-handed medium pace, had a great time watching the Pakistani pace trio of Amir-Rahat Ali-Wahab Riaz, as all three are left-arm pacers. In fact, Arjun was even captured making bowling gestures by rolling his arms.

It is notable that Sachin Tendulkar is in London these days, as he underwent a surgery on his leg. He is recuperating in the city where Arjun seems to have joined him. Both Arjun and Qasim are almost same age and would have surely bonded well. 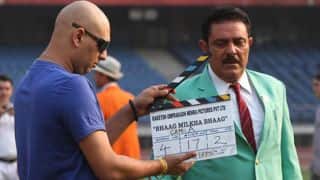 Virat Kohli calls for “one religion”