His rise as a batsman has helped Sri Lanka find success in limited-overs cricket and the side that won the World Twenty20 Championship in 2014, and appeared in five World Cup finals (T20Is and ODIs) in the last eight years.

Tillakaratne Dilshan became the latest member to join the elite club of 10,000 runs in One-Day International (ODI). He achieved the feat during the fifth and final ODI against Pakistan on Sunday. Dilshan became the fourth Sri Lankan batsman after Kumar Sangakkara, Sanath Jayasuriya and Mahela Jayawardene, to reach the five-figure mark in the format. As wine gets better with age, so is the 38-year-old. Suraj Choudhari explores how the Sri Lankan stalwart has improved with age.

Dilshan’s career graph has witnessed tremendous highs in the last few years. In fact, his ODI batting average of 59 this year reflects that. Even in 2013, he was prolific and the average went as high as 61.05. While the likes of Kumar Sangakkara and Mahela Jayawardene deserve the kudos for taking Sri Lanka to new highs, Dilshan ought to be mentioned in the same bracket.

His rise as a batsman has helped Sri Lanka find success in limited-overs cricket and the side that won the World Twenty20 Championship in 2014, and appeared in five World Cup finals (T20Is and ODIs) in the last eight years.

Not only Dilshan has grown as a batsman in his 30s, his experience and tactics also make him a wily customer with the ball, who often provides breakthroughs in the most crucial junctures.

Though less elegant than a Sanga or Mahela, Dilshan is more than effective and relies on timing. He can play long innings and can accelerate at will. A make-shift opener, he isn’t much dependent on footwork and relies more on hand-eye coordination. He is known for his inventive batting and the famous ‘dil-scoop’ is a testament to his ability to do so. On the contrary, being a sub-continent batsman he can also play spin well. To add to his advantage, Dilshan is an excellent fielder.

Many cricketers are known for scoring runs in their own den but Dilshan’s average at home and away venues differs slightly. He averages 41.92 at home and 38.41 away from it. So conditions don’t really matter to him.

Till January 2009, Dilshan played as a middle-order batsman but post a series against Pakistan, he became a regular opening and went on to redefine the spot. In fact, his batting average has improved drastically as soon as he was promoted in the batting-order and Dilshan became a different player. As an opener he averages 45.34.

Sri Lanka, who lost the recent ODI series against Pakistan, are missing the services of Sangakkara and Jayawardene. Sangakkara retired from ODIs probably when he was in the best form of life. With the two masters gone, Dilshan provides the side with the much needed hope. Though the three belong to the same age-group, Dilshan still believes he has much steam left in him to continue for another few years. The numbers have only soared for the right-hander with every passing year and fans in the island country wouldn’t mind if he continues this way. 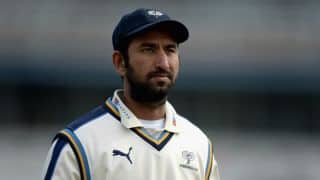 Cheteshwar Pujara: 'I have admired APJ Abdul Kalam a lot'