The blow that shook the cricket world!

The blow that shook the cricket world!

The series of pictures shows how South Australian opener Phil Hughes was hit by the rising ball and the aftermath.

The entire world of cricket has rallied around Phil Hughes, after he was struck on the head by a Sean Abbott bouncer. The incident occurred during the first day of the Sheffield Shield match between New South Wales and South Australia at Sydney Cricket Ground (SCG) on Tuesday.

The series of pictures shows how Hughes, who was in line for a recall for the first Test against India starting December 4, was hit by the rising ball and the aftermath. After being hit, Hughes stood dazed at the crease for a few seconds, before collapsing on to the pitch. Hughes had to be air-lifted to the hospital and the match was stopped, and later declared a draw.

Hughes has undergone surgery and still remains critical. The cricket fraternity and the fans, around the world, have expressed shock and extended their support to the 25-year-old Australian opener. 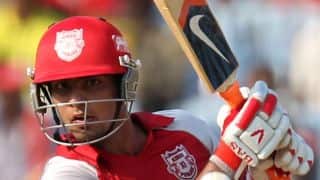