When ‘minnows’ Bangladesh stunned the strong Australians at Cardiff

When ‘minnows’ Bangladesh stunned the strong Australians at Cardiff

On this day, exactly 10 years back, Bangladesh produced one of cricket’s greatest upsets when they beat the world champions Australia by five wickets at Cardiff.

Ricky Ponting’s Australia had won the World Cup in 2003 and those were times when the side could do nothing wrong. When they landed in Cardiff to play against Bangladesh in the second One-Day International (ODI) of the NatWest Series, the match resembled David taking on Goliath. Australia were the best side and Bangladesh had just been beaten by England in the first ODI.

On this day, exactly 10 years back, Bangladesh produced one of cricket’s greatest upsets when they beat the world champions Australia by five wickets at Cardiff.

The chase of 250 wasn’t going to be easy and Bangladesh at one stage were reeling at 72 for three in the 21st over. It was then reported that Mohammad Ashraful’s mother was worried about his slightly built son taking on the strongly built Australians. But for the little man that wasn’t a concern as he struck 11 fluent boundaries in his knock of 100, to be Bangladesh’s hero. In the above image, we see the then 20-year-old right hander celebrating the feat.

Bangladesh skipper Habibul Bashar played a good hand of 47 and later it was Aftab Ahmed’s cameo of 13-ball 21, that saw the side home. It was a monumental occasion for the side that were then considered as minnows. Back in Bangladesh, the supporters celebrated like no tomorrow as the side who had beaten India in an ODI in December 2014, had now toppled the greatest giant of all.

The smiles remained for long and captain Bashar famously remarked, “I am probably the happiest man in the world.”

Curtly Ambrose with his wife Bridget 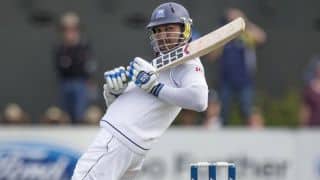