Moeen Ali and Ian Bell put on 172 runs for the opening wicket.

England captain Eoin Morgan believes that the 119-run win against Scotland will give his team a lot of confidence. England lost the first two games of the ICC Cricket World Cup 2015 against Australia and New Zealand very convincingly. The win against Scotland keeps them in the hunt for that quarter final berth but they have tough games coming up as well. ICC Cricket World Cup 2015: POINTS TABLE

Morgan heaped praise on opener Moeen Ali, who scored a magnificent century for them. He says that Moeen Ali is an excellent all-rounder. Even with the ball he gets very good purchase as a result, his value in the team is very high. Moeen (128) and Ian Bell (54) put on 172 runs for the opening wicket that propelled England to 303 for eight in their 50 overs. Morgan was amongst the runs too as he made a quick fire 46 to help England cross the 300-run mark. ICC Cricket World Cup 2015: SCHEDULE & MATCH DETAILS

In reply, Scotland were bundled out for 184 in the 43rd over with Steven Finn being the pick of the bowlers with figures of three for 26 in his nine overs. James Anderson, Chris Woakes and Moeen picked up two wickets apiece. ICC Cricket World Cup 2015: Complete Coverage 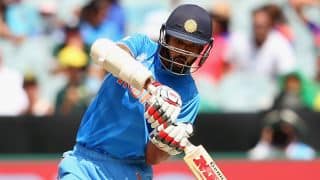 Shikhar Dhawan: It is a fantastic feeling to get a 100 in your first World Cup