In ICC Cricket World Cup 2007 in West Indies, Sri Lanka and South Africa met in the super eight stage. It seemed one of those regulation, one-sided matches which the side batting second wins at a canter. And then suddenly it changed into a furore of flying bails and departing batsmen as Lashith Malinga takes four wickets in four balls. READ Preview: Sri Lanka vs South Africa

Meanwhile, Sri Lanka had a similar fate in their group, easing past all their opponents other than New Zealand and Australia. Their top order is in very good form, especially Kumar Sangakkra, who have already scored four back to back hundreds. For South Africa, all eyes will be on AB de Villiers. ICC Cricket World Cup 2015: SCHEDULE & MATCH DETAILS 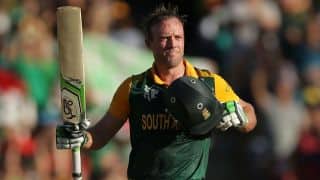