India were outdone by a second successive eight-wicket haul by off-spinner Nathan Lyon, who was adjudged the man-of-the-match, on a pitch that favoured the seamers.

Perth: Australia took just about an hour to wrap up the Indian innings on the fifth and final day to secure an emphatic 146-run series-levelling victory in the second Test at Perth on Tuesday.

Resuming from their overnight score at 112/5, India lost their last five wickets for 28 runs as the hosts won their first Test match since the ball-tampering scandal broke out in South Africa earlier this year.

The visitors were outdone by a second successive eight-wicket haul by off-spinner Nathan Lyon, who was adjudged the man-of-the-match, on a pitch that favoured the seamers.

Overnight batsmen Hanuma Vihari and Rishabh Pant batted only six overs on Tuesday before the partnership was broken. Vihari was the first to go after he lobbed a catch back to Mitchell Starc. The freely-attacking Pant was dismissed Lyon after Peter Handscomb picked up a good catch diving low at mid-on.

It was just a matter of time before Australia romped home. Umesh Yadav added just two before he returned a simple catch to Starc. Ishant Sharma edged it behind off Pat Cummins, while Jasprit Bumrah hit a skier off Cummins as the hosts sealed the win with two Tests to go on Boxing Day at Melbourne on December 26.

The fourth and final Test begins on January 3 at the Sydney Cricket Ground. 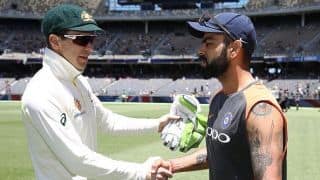