VIDEO: Ireland are keen to come back strong, says Porterfield

VIDEO: Ireland are keen to come back strong, says Porterfield

Ireland were dealt a harsh 201 run defeat against South Africa.

“Yeah, obviously that was a big chance,” he said about Hashim Amla’s dropped catch at 10. “We had a chance to take Hashim there and he obviously made us pay. He’s a fantastic player and we were not going to get too many chances off him, especially on such a good wicket.” ICC Cricket World Cup 2015: SCHEDULE & MATCH Details

He also had a few kind words to say about his own team’s performance despite the magnitude of the defeat. “We did very well in stages, Maxie (Max Sorensen) and Kevie (Kevin O’Brien) would’ve liked to started a bit better in the first ten.” And the spinners bowled very well and the batsmen couldn’t get on top of them even though they were only one down through that middle period. ICC Cricket World Cup 2015: Complete Coverage 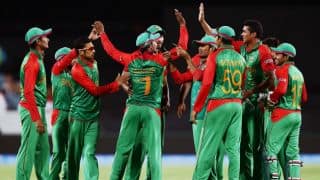