Bangladesh cricket fans did not take this action of Indian skipper lightly.

India skipper MS Dhoni was involved in an accident where he was seen pushing Bangladesh left-arm pacer Mustafizur Rahman with his shoulder. Mustafizur went on to claim five wickets in his One-Day International (ODI) debut as Bangladesh thrashed India by 79 runs in Dhaka on Thursday. READ: Was MS Dhoni right in pushing Mustafizur Rahman aside?

The 19-year-old’s figures of 5-50 helped Bangladesh dismiss India for 228 in 46 overs after half-centuries from Tamim Iqbal, Soumya Sarkar and Shakib Al Hasan led the hosts to a record target of 307 runs. READ: Bangladesh inflict record defeat on India

While taking a single during India’s chase, Dhoni was on his way to take a quick single when Mustafizur appeared midway in the line of the run. Dhoni used his shoulder to guard against Mustafizur rather than crashing into him. Being pushed by Dhoni with his shoulder, Mustafizur felt little discomfort. However, the umpires were quick enough to clear any misunderstanding. READ: Mustafizur Rahman takes five wickets on ODI debut, becomes 10th man to do so

Although, Bangladesh cricket fans did not take this action of Indian skipper lightly. This was not the first time that Mustafizur made a batsman upset. Earlier, Rohit Sharma was seen talking to the younger bowler when he came in his way while taking a single. READ: Overconfident India succumb to humiliating defeat against Bangladesh in 1st ODI 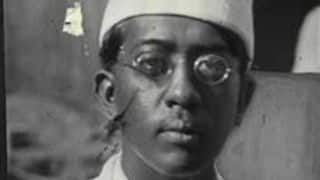