Video: Ravichandran Ashwin speaks after the match on day four of the fourth Test at Adelaide

Video: Ravichandran Ashwin speaks after the match on day four of the fourth Test at Adelaide
By CricketCountry Staff

India were lurching towards defeat and a 4-0 series humiliation against Australia after another batting collapse in the fourth Test in Adelaide on Friday.

The beleaguered tourists, chasing a record 500 runs to win, took the Test into a fifth day for the first time in their ill-fated tour but only after losing their top six batsmen, including Sachin Tendulkar.

Laxman, struggling for form in Australia, played spinner Nathan Lyon off the back foot to short mid-wicket for 35 leaving nightwatchman Ishant Sharma surrounded by 10 close in fielders.

But in the day's penultimate over Kohli was run out on a chancy single by a brilliant side-on throw by Ben Hilfenhaus for 22 to leave the tourists in tatters.

Australia will expect to mop up India's tail on Saturday with only forecasted storms likely to save the visitors from another embarrassing capitulation.

At the close on the fourth day, India were 166 for six, trailing by 333 runs with Sharma on two and Wriddhiman Saha yet to score. Lyon ended the day with three for 57 off 19 overs.

The tourists were left with 146 overs to reach their improbable target after Australia declared their second innings at 167 for five shortly after lunch.

But they were soon in trouble, losing Gautam Gambhir for 13 in the fifth over, caught behind off Harris.

Stand-in skipper Virender Sehwag blasted 12 fours in a rollicking 62 off 53 balls before he skied a full toss from spinner Lyon only to a waiting Ricky Ponting in the covers.

Rahul Dravid lasted 71 balls before he edged to Mike Hussey in the gully off Ryan Harris for 25 to complete a poor series in which he was bowled six times and scored just 194 runs at 24.25. 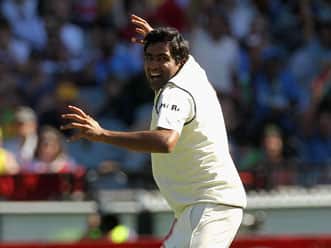