Steven Smith brought about his maiden Test double century against England in Ashes 2015 to ensure Australia maintained their grip on the second Test at Lord’s. Australia had piled up 337 for one on Thursday before Steven Smith (215) and Chris Rogers (173) extended their overnight hundreds into Test-best scores. Smith’s score, the seventh highest individual Test score at Lord’s, was also Australia’s second highest at the ground behind cricket great Don Bradman’s 254 in 1930. But his hopes of breaking that 85-year-old Australia record ended in very modern fashion when he was lbw trying to reverse-sweep Joe Root. The sheer extra speed of Australia’s fast bowlers made talk of a ‘docile’ surface all but redundant as England slumped to 30 for four inside 11 overs as they started their reply. Above is the video of Smith’s 111 against England at Perth in Ashes 2013-14.

Mitchell Starc needed just two balls to remove Adam Lyth for a duck as the left-hander played at a delivery he could have let go and was caught behind. Wicketkeeper Peter Nevill, making his debut after Brad Haddin withdrew for “family reasons”, could not have wished for an easier first dismissal in Test cricket. Johnson, like Starc a left-arm fast bowler, needed just three balls to uproot Gary Ballance’s off-stump as he fell for 23. Then 28 for two became 29 for three when Ian Bell (one) was bowled by a Josh Hazlewood delivery that held its line. Joe Root, dropped on nought before making 134 in England’s 169-run win in the first Test in Cardiff last week, also went for one when, trying to force the ball of the back foot, he was caught behind off Johnson to leave England 30 for four. England fans had mocked Johnson during his first-innings return of none for 111 in Cardiff.

Australia resumed with Rogers 158 not out and Smith, dropped in the slips on 50 by Bell on Thursday, unbeaten on 129. There was drama with Friday’s first ball when Rogers was struck on the side of the helmet by James Anderson. Rogers, who missed Australia’s preceding Test series win in the Caribbean after suffering concussion while batting in the nets, needed several minutes’ on-field treatment. Two balls later, however, the 37-year-old left-hander square-drove Anderson for four.Stuart Broad, who bowled well for his four for 83 in 25 overs, eventually pierced Rogers’s defence with a nip-back ball. Rogers, who has said he will retire at the end of this series, batted for over six-and-a-half hours, faced 300 balls and struck 28 fours on his adopted ‘home ground’, having spent several seasons with Lord’s-based Middlesex. His stand of 284 with Smith topped the previous Australia record Test partnership at Lord’s of 260 shared by openers Mark Taylor and Michael Slater in 1993. Smith, who until twice making 33 in in Cardiff, was ranked as the world’s number one Test batsman, had gone to his sixth century in his last eight Tests on Thursday. Having been out for 199 against the West Indies in Kingston last month Smith completed a maiden Test double century when he whipped off-spinner Moeen Ali legside for a 24th four in 336 balls. 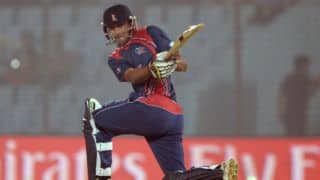 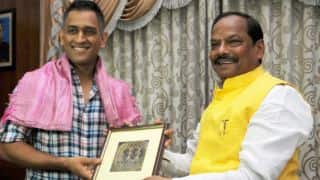