Five batsman, one wicketkeeper and a seam-bowling allrounder appear the perfect blend in England.

India have underlined their status as the second-ranked team in ODI cricket by winning back-to-back series in Australia and New Zealand, to follow the Asia Cup title and the home win over West Indies in late 2018.

Virat Kohli‘s team thus stand as viable contenders for the 2019 ICC Cricket World Cup, along with hosts England, for the mega event starting May 30.

With five ODIs – all against Australia – left before India open their World Cup campaign against South Africa on June 5, the team essentially picks itself based on their performances over the past year. (READ MORE: Wellington win will have a keen bearing on India s World Cup squad)

The reserve wicketkeeper for the World Cup will between Dinesh Karthik and Rishabh Pant, with no other batsman outside the current crop expected to make it to the final squad of 15. The likes of KL Rahul and Manish Pandey could still slot into the squad, but it is unlikely. (READ MORE: What is India’s ideal XI for World Cup?)

Here are the stats for India’s preferred top seven, over the past 12 months:

India’s stand-in skipper when Kohli has been rested, Rohit is the team’s second-highest run-getter over the last year. His reputation as one of the best ODI openers, if not the best, stands intact after a very productive 12 months.

Dhawan’s ODI form has been patchy over the past year, but he remains the preferred opening partner with Rohit, with whom he has totalled 5701 runs in 138 ODIs which is the third best for India ever. The fact that Dhawan’s ODI average in England is 65.06 is proof of his value.

Hands down the best ODI batsman today, Kohli is the man on whom so much rests in England. Leading India for the first time in the World Cup, his skills at both setting and chasing targets is pivotal.

From out of the wilderness, Rayudu overcame injury to make his way back into India’s ODI plans after the 2018 IPL and has been endorsed by Kohli, Rohit and Ravis Shastri as India’s No 4 for the World Cup. While has not been wholly convincing, his form and ability to maintain an innings puts him as the best possible option.

His batting continues to divide opinion, but as a wicketkeeper to spinners and tactician, Dhoni is unparalleled. His batting form in 2019 has been better than the past year, with a Man-of-the-Series role in the 2-1 win in Australia followed by a stroke-filled 48* in one innings in New Zealand. Dhoni 2.0 is the batsman India’s middler order will need to bat around.

In and out on account of injury, Jadhav’s street-smart batting and handy offspin slots him into the vital No 6 slot. His recent form has been good.

Not the best of years as he missed a lot of games with injury and then a suspension for comments on an Indian talk show, but Pandya is a massive player for India at the World Cup. His handy seam bowling, electric fielding and ability to hit the ball long and hard – his recent 45 off 22 balls in Wellington was testament to that – places him as a very crucial figure at No 7. 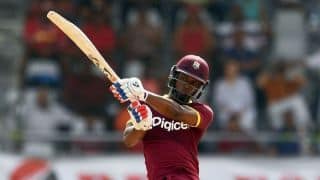