The resurgence of Shami and Pandya's return have given India a problem of plenty.

A second consecutive bilateral ODI series win on the trot overseas – after the 2-1 victory in Australia – for Virat Kohli‘s Indian cricket team, courtesy an unassailable 3-0 lead over New Zealand after Monday’s seven-wicket win has further solidified their status as No 2 in ODIs.

The return of Hardik Pandya, who in his first international match since September claimed 2/45 and held an acrobatic catch, is what Kohli wanted and would have left the skipper vindicated. A second Man-of-the-Match award for Mohammed Shami in three games has underlined again the pace bowler’s value to a very good bowling attack, while an unbeaten 38 off 38 balls from Dinesh Karthik, keeping wicket in place of the stiff MS Dhoni, has once more thrown light on his role in the squad.

These three factors, combined, have set India up interestingly with seven ODIs left until the 2019 ICC Cricket World Cup.

As former India cricketer Deep Dasgupta articulates in these pages, Pandya is a must for India at the World Cup because he is the best available allrounder. He can hit 140kph, has a tricky slower bouncer and is a big hitter and electric fielder. His presence allows India to play two spinners, but now with Shami putting in a string of exceptional performances, it has thrown into question whether India will field the successful wrist-spinning pair of Kuldeep Yadav and Yuzvendra Chahal in tandem.

Before Shami emerged as a viable source of wickets up front and at the death, India used Bhuvneshwar Kumar and Jasprit Bumrah as the pace spearheads, with Umesh Yadav, Khaleel Ahmed, Siddarth Kaul, Deepak Chahar, Umesh Yadav and Mohammed Siraj making fleeting appearances. With Bumrah rested for the Australia and New Zealand ODIs, Shami has grabbed his chance with both hands and this year has 12 wickets from six ODIs at an average of 21.16 and economy rate of 5.01.

So not only has be proven mighty important for India in successive series wins, he has pitchforked himself into World Cup reckoning and could, with each passing ODI, push Bhuvneshwar out of the starting XI. When Bumrah returns, he will walk right into the team. With Pandya back as the seam-bowling allrounder, he is locked in for England. That leaves India to opt for a third quick, which could prove a toss-up between Bhuveshwar and Shami. (READ MORE: Things are more or less running in auto mode for us: Kohli)

Bhuvneshwar in 2019 has been excellent too, with 12 wickets at 20.58 apiece while conceding runs at just 4.94 per over. His pace has been good, the accuracy a feature and his subtle movement proving tough for both Australia’s and New Zealand’s top orders. And he’s been effective at the death.

Before Shami’s resurgence after a year in which he played 12 consecutive Test matches and overcame personal problems – which took a toll on him mentally, no doubt – India would likely have looked at the bowling combination of Bhuvneshwar, Bumrah, Pandya, Kuldeep and Chahal. But now they have a handy problem, which is how to play Shami. It cannot be bad problem to have. (READ MORE: Shami: Unsung hero of India’s solid year)

Now to the spinners. In 26 ODIs together, Chahal and Kuldeep have claimed a combined 101 wickets. They were a huge factor in India winning an ODI series in South Africa for the first time, and proved decisive in India winning in Australia and New Zealand. In England last summer, where India were beaten 1-2 in the ODI leg of their tour, Kuldeep took nine wickets and Chahal two. In 2019, Chahal has 12 wickets from four matches across Australia and New Zealand; Kuldeep has 10 from five in the same countries.

In England, where the World Cup will be played, over the last five years the most successful ODI bowler is the legspinner Adil Rashid with 69 wickets from 40 games. At fourth is Moeen Ali with 31. Spin will have a say, but whether India replicate the successful Chahal-Kuldeep pairing across the tournament is not so certain. The conditions in England have assisted spin and seam, but with smaller grounds inviting massive scores since the end of the 2015 World Cup, playing two spinners is not without risk.

The batting is far more straightforward. Rohit Sharma and Shikhar Dhawan are the openers, Kohli will bat at No 3 and Dhoni, with three fifties in ODIs this year, will keep wickets and bat at No 5 with the middle order needing to bat around him. Kedar Jadhav’s success in New Zealand locks him in at No 6, plus he’s a handy bowler to have.

Ambati Rayudu was all but confirmed as India s No 4 for the time being by Kohli last year, and later that month Rohit also endorsed the batsman s skills at that role during the Asia Cup. Then, after India lost the first ODI in Australia this month, Rohit came out said what nobody from the Indian camp had stated publicly: that Dhoni was better suited batting at No 4.

Last week, Kohli said that the No 4 spot needed to be “solidified”. On Monday, after India sealed the series with two games to spare in a match in which Rayudu scored 40 not out from 42 balls, Kohli said that things were more or less running on auto-pilot mode for India ahead of the World Cup.

So then, it this India’s likely XI for their World Cup opener versus South Africa come June 5 at Southampton? 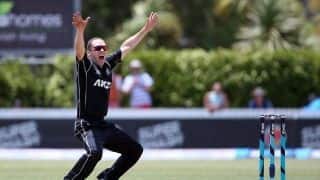 Gutted not to bowl against Virat Kohli: Todd Astle 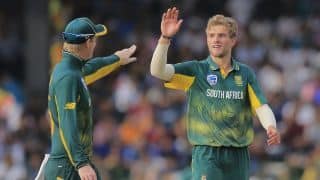