The Blackcaps have been out-batted, out-bowled and out-thought by India.

A keenly-awaited five-match ODI series between the second-ranked team, India, and New Zealand a spot behind them at No 3 has been decided in the visitors’ favour in three successive games. India wrapped up the series on Monday at Mount Maunganui’s Bay Oval, thus continuing a hot streak that has spanned five wins out of six ODIs this year.

After beating Sri Lanka 3-0, Kane Williamson‘s team appeared a stiff challenge for Virat Kohli‘s men but the gulf in class has left the hosts wondering what went wrong.

Here’s a look at the key factors for India being up 3-0 with two ODIs left, with the stats highlighting the difference. (READ MORE: India take series with seven-wicket win)

Rohit Sharma and Shikhar Dhawan are a big reason for India’s unbeaten run. Dhawan is the series’ leading run-getter with 169 runs in three innings at an average of 84.50, courtesy fifties in the first two games. Rohit drew close on Monday before he was dismissed to settle with 160 runs at 53.33, with two fifties. (SCORECARD: INDIA vs NEW ZEALAND)

In conditions where the ball has not swung prodigiously but instead just a fraction, the pair of Mohammed Shami and Bhuvneshwar Kumar has out-bowled New Zealand’s quicks. Shami has been nothing short of exceptional up front and at the death. In the first ODI in Napier, he was Man of the Match for dismissing Munro and Guptill and trapping Santner lbw in the 30th over to finish with 3/19 in six overs. Shami’s opening burst of 4-2-13-2 set the tone for India’s dominance while Bhuvneshwar conceded 20 from his five overs. (AS IT HAPPENED: INDIA vs NEW ZEALAND, 3rd ODI)

In that same ODI, Trent Boult began with 4-1-11-0 while Tim Southee conceded 24 in as many overs. They ended with 0/19 from six and 0/36 from 6.5, respectively. Lockie Ferguson took 1/41 in eight overs and Doug Bracewell 1/23 from seven. India lost their first wicket in the tenth over with 41 runs on the board and the second in the 29th, by which time they had reached 132. They won with eight wickets remaining.

In the second game, Bhuvneshwar and Shami each took an early wicket, though not as frugal as in Napier. Bhuvneshwar finished with 2/42 from seven overs, Shami ended with 1/43 from seven of which 18 runs came in one over. In comparison, Boult claimed 2/61 in ten overs but his wickets came at the back end of India’s innings. Bracewell went wicketless across ten overs that cost 59 runs and Ferguson had 2/81 in ten. (READ MORE: On ODI comeback, Hardik Pandya underlines bowling value)

On Monday, Bhuvneshwar and Shami took out the openers in 37 balls to hand New Zealand another poor start. Shami returned at the death and took two wickets in an over and Bhuvneshwar followed him to end the innings in the 49th over. Shami claimed 3/41 in nine overs, Bhuvneshwar 2/46 in ten.

In the chase, India poached five boundaries in Bracewell’s first two overs to send him off with 0/27 in three. He finished with none for 49 in six. Boult (2/40 in 10) and Ferguson (0/57 in 10) bowled well but the lack of wickets meant India remained in control.

The wrist-spinning pair of Yuzvendra Chahal and Kuldeep Yadav have claimed a combined 14 wickets in three ODIs. Man to man, Kuldeep has eight wickets at an average of 15.37 while conceding runs at 4.39 over while Chahal has six at 24.33 apiece and an economy rate of 5.15. India have played the pair in each ODI, not caring about the smaller grounds.

New Zealand, meanwhile, dropped the legspinner Ish Sodhi for the first ODI, the left-arm spinner Mitchell Santner for the second and for the third included both. Santner’s 17 overs have cost 77 runs for an economy of 4.52 but he’s managed only one wicket. Sodhi remains wicketless after bowling 17 overs which have gone for 96 runs.

Again, India trump New Zealand here because of their ability to pick up the scoring and maintain tempo.

All told, India scored 307 from overs 20-40 across three ODIs while losing six wickets for an average of 5.63. In comparison, New Zealand scored 318 runs for the loss of 14 wickets at 5.48 per over. Not losing as many wickets was massive for India. 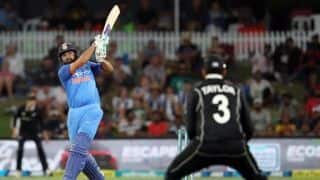