India need four pacers in England, but that could come at the expense of a third spinner.

WELLINGTON: When news filtered in that Virat Kohli had been rested for the last two ODIs against New Zealand, it was met with a tone of disappointment mostly from the Indian diaspora in Hamilton and Wellington. Tickets had been sold in advance, and everybody was keen to see the world s best batsman in action.

Bilateral ODI series, though, are experimental hotbeds. It doesn t matter if they are played at home or overseas; once the series is won, you can bring in fresh faces and trial different strategies. It is a normal practice, particularly true for a World Cup year. As such, the selectors and team management rolled the perfect dice in resting Kohli, thus affording more opportunities to the middle order batsmen in the remaining two matches.

Two other factors helped out as well. One, New Zealand kept fighting until the very end despite being down 3-0 in the series. There was a lot of pride at stake, and even whilst experimenting themselves, the Blackcaps continued to pick a heavy-duty bowling attack and chipped away at the Indian top order. Two collapses in two matches set the tone for Ambati Rayudu, Vijay Shankar, Kedar Jadhav and Hardik Pandya to prove their mettle in the middle.

Hamilton was an opportunity lost, but New Zealand s impressive opening burst put them focus back on the Indian batting in Wellington. The other pointer herein is that India didn t shuffle their middle order in Kohli s absence. Shubman Gill may or may not be in consideration for the World Cup, but with him batting at number three, it was all about replicating what a tough situation in English situations could look like this summer.

In that light, India s win after recovering from 18/4 is perhaps their best in this eight-match contest against Australia and New Zealand. Since January, the twin ODI series India s last in overseas conditions before the World Cup answered many questions regarding the top-order dependency, sorting out the third pacer option (in Mohammed Shami) and MS Dhoni regaining his finishing touch. (READ MORE: What is India’s ideal XI for the World Cup?)

Collectively then, the aforementioned batsmen solved the middle order problem at least for the near foreseeable future. The big difference was in changing tactics and bringing in an additional all-rounder, which delayed Pandya s arrival to the crease until number eight. This tactic could be suited for early summer conditions in England, wherein Kohli might want to use four seam bowlers. (READ MORE: Mohammed Shami gives India an alternative to Bhuvneshwar Kumar)

More importantly, the Rayudu-Shankar partnership put up a base that helped prevent a collapse similar to the one at Seddon Park, and laid down the marker for Jadhav and Pandya to do their aggressive hitting bit at the end. From one batsman to another, momentum flowed after they had built a base Rayudu did the anchoring job, Shankar kept the scoreboard ticking, Jadhav helped stitch partnerships with both Jadhav and Pandya, allowing the latter to take off as India crossed 250 which was earlier unthinkable. (READ MORE: Eccentricity key for rare allrounders like Hardik Pandya)

Let it be said here that the middle order proved itself in a tough examination, and provided a blueprint for success in the World Cup, at least for the initial part of it with backing this particular strategy of using two pacers, two batting seam all-rounders and one spinner. Additionally, they assured themselves of certain spots for the World Cup squad, leaving only a couple slots at most that need pondering.

The first is regarding an all-round batsman, who can do the job at top of the order and in the middle order, both. KL Rahul and Ajinkya Rahane are two names who can put up their hands for this job, while Dinesh Karthik will also be in running for the job. Missing out in Wellington will hurt him a lot, for Karthik is also in a straight fight with Rishabh Pant for the second keeper-batsman slot. The fact that the Wellington middle-order combination worked might dent Karthik s chances of making the World Cup.

The other slot is also dependent on success in Wellington, with the extra pacer or spinner the topic of debate. Post match, vice-captain Rohit Sharma said that he considers Jadhav as a front-line spinner simply on his wicket-taking ability and for good reason. Kane Williamson attacked Yuzvendra Chahal immediately, and Jadhav was introduced instead to counter the skipper s charge. It resulted in his wicket, and Chahal returned later to wreak havoc on the lower order again.

Ideally, India would want four pacers for the World Cup, but that could come at the expense of a third spinner if Shankar is picked too. It would mean Ravindra Jadeja is dropped and India will only take two front-line spinners, relying on Jadhav to do the part-timer duties thereafter.

This bowling combination was a departure from norm and it could be a huge hint, as concerns the World Cup selection. All in all, when the selectors do sit down some time in April to pick that all-important squad, this victory at the Westpac Stadium will bear a heavy influence on their calls. 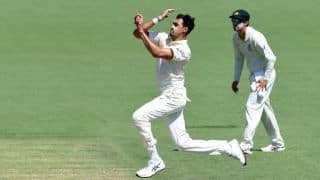 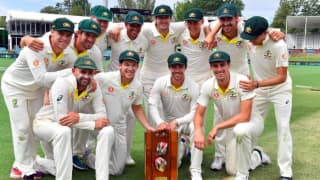