Aditya Tare, in his first full season as Mumbai skipper, has brought home their 41st Ranji Trophy title. Mumbai dominated with the bat and were clinical in their bowling. Tare has been a part of a Ranji Trophy winning side before, but doing so as a captain would undoubtedly have been one of the proudest moments of his career. Ahead of the Irani Trophy match against Rest of India, Pramod Ananth spoke to Tare about Mumbai’s incredible Ranji Trophy season, his India dreams, Shreyas Iyer, his new Indian Premier League (IPL) team, and more.

CricketCountry (CC): Congratulations on the Ranji title. This was your first full season as Mumbai Captain. How was your experience?

Aditya Tare (AT): Thank you. It was a challenge, to be honest, but a very interesting one. Thanks to the confidence we got from the last season with the young team, we could make it to the semi-final. So, that was good.

CC: Your next match is going to be Irani Trophy against Rest of India. There are some quality international players in their side. Is Mumbai ready for the challenge?

AT: Yes, absolutely. Confidence is high among the boys. We love taking on challenges. It is going to be a good game against a good side.

CC: You had 48 dismissals this season, which is a Ranji record. Did the fact that your coach [Chandrakant Pandit] was a former Wicketkeeper help in this regard?

AT: Yes, but I have been in contact with Kiran More. He is always the one looking after my ‘keeping. So, whatever problems I have, I am always in touch with him, he helps me in ‘keeping and whenever he is in Bombay he comes to practice session and works with me. I would like to give lot of credit to More for the record.

CC: Talking about your batting, you scored over 550 runs at a very good average. Did the fact that you were captain also help your batting?

AT: As captain I would like to take that responsibility. I just feel that I should be leading from the front when it comes to performances as well. So I try and do that.

CC: Shreyas Iyer was in excellent form this season. Are your expectations from him going to be higher in the future?

CC: Did Wasim Jaffer congratulate you or get in touch with you after the victory in the final?

AT:  Yes, absolutely. He has always been in touch with me. I have been with him in IOC [Indian Oil Corporation] and everywhere. So he is always in touch.

CC: Mumbai have a few useful all-rounders, like Abhishek Nayar and Suryakumar Yadav. As captain, is it advantageous to have so many options or you get confused as to where and when to use them?

AT: Having Nayar in the side gives us a lot of balance because he does a lot of bowling for us and he is obviously a great player with the bat as well. He gives us an opportunity to play an extra batsman or bowler.

CC: Vishal Dabholkar missed a chunk of the season. Was it difficult to cope without him, or do you think a spinner like Iqbal Abdullah played his part well?

AT: Both of them are very good spinners. Sometimes, we have to pick one and cannot play two spinners because the wickets are flat or seamer-friendly. On turners we pick both. So, the competition is good for us.

CC: Talk us through the final day of the final. It was Day Three; Mumbai had a very slender lead. Did you honestly think that you would finish off the match the same day?

AT: No, not really. But the way [Siddhesh] Lad and Ballu [Balwinder Sandhu] played, got us over 100 runs for the last wicket sort of changed the match. With the amount of intensity we bowled and fielded, it was creditable to all the bowlers and fielders. We came to party on the last day because in the first two days we had the chance of having an upper hand and killing the game, but we could not do that. On the third day we really outplayed them and pushed the pedal too hard on them from which they couldn’t recover from.

CC: Do you think you had a couple of good seasons for Mumbai. Do you think you can stake claim for the wicketkeeper’s spot in the Indian team across formats especially with talks of MS Dhoni’s retirement after the World T20 doing rounds?

AT: Look, I would love to do that. It is a dream to represent India in all formats, especially in Tests. Having said that, I have to keep repeating these performances in the domestic circuit. I have to keep improving my game and leave the selection to the Selectors. That is not my job. I just have to perform well.

AT: Absolutely excited. Auction is not under my control. You would see in the auction that Mumbai did go for me, they showed interest in me but unfortunately I was not picked. I am very happy that I have come to Hyderabad. I am looking forward to joining the new team and doing really well for them. I am really excited to go there and play for them. 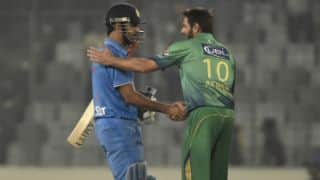