Determined not to let his team down a second time around, Ajinkya Rahane pulled out all stops in the second dig at the Adelaide Oval.

Adelaide: Feet static, hands thrown at the widish ball, Ajinkya Rahane was a picture of despair and self-disgust on day one of the first Test at the Adelaide Oval on Thursday. Josh Hazlewood had dangled the bait in front of him and Rahane had risen to it, driving so far away from his body that his right hand came off the handle almost as soon as the ball made contact with the outside edge.

The moment Peter Handscomb wrapped his hands around the ball at second slip, Rahane threw his head back in supreme disappointment. At the best of times, it was an extremely poor stroke. With his team in grave trouble on day one of the series, it was exactly the kind of stroke the vice-captain should have avoided.

Rahane s dismissal had left India reeling at 41 for four with half an hour to go for lunch. It needed a remarkable century from Cheteshwar Pujara for the visitors to scramble to 250, a total that was no more than par for the course on a tricky if not diabolical surface.

Determined not to let his team down a second time around, Rahane pulled out all stops in the second dig as India sought to build on a slender 15-run advantage. The first statement of intent came on the third evening when, with less than quarter of an hour to stumps, Rahane opted to walk in at his original No. 5 position even though the prospect of seeking refuge behind a nightwatchman might have been tempting. Building on his resolve, the little right-hander produced a veritable gem on the fourth morning, associating himself in a vital partnership of 87 with Pujara that could yet be the difference between the two sides.

India began Sunday s fourth day 166 in front with seven wickets in hand, a position of strength but by no means the done deal. Pujara was batting like a million dollars again, but it wouldn t have been fair to expect him to carry the side on his own for a second time in four days. He didn t have to, not with his vice-captain in the mood for battle as he placed a premium on his scalp without going totally on the defensive, as sometimes can be his wont.

There was plenty of help for Nathan Lyon, the crack off-spinner who repeatedly asked difficult questions through turn from the rough and outside it, and through bounce with the ball hitting the bat quite high. Watchfulness was a must, but merely defending dourly would only eventuate in one outcome. Rahane fused industry and enterprise superbly with caution and care, working the gaps, putting the bad balls away and growing in confidence as he spent more time at the crease.

It s been a difficult year for Rahane, as it has been for most of India s batting line-up with the notable exception of Virat Kohli. He was dropped for the first Test of 2018 in Cape Town, and for the next in Centurion, on the back of a poor run of scores against Sri Lanka at home even though his overseas record was a lot more encouraging. When he returned in Johannesburg, he batted with rare authority in the second innings, dancing his way to 48 and having a significant say in India s consolation triumph in the dead rubber. But a return to India for the one-off Test against Afghanistan triggered another run of poor scores as he failed to touch 20 in five innings.

The reversal of fortunes came about in Nottingham, when Rahane blazed to 81 in the first innings and bedded down for 29 in the second in India s spectacular 203-run victory. He then followed it up with scores of 11, 51, 0, 37, 41 and 80 coming to Australia, consistent enough on the face of it but a big one remaining elusive. His last hundred came 16 months and 23 innings back in Colombo, but while a century is a massive milestone, Rahane will gladly take his 70 on Sunday for the impact it has had.

Rahane has had his problems with Lyon in the past, again like most of India s top-order, but there was a method to his batting on Sunday indicative of the amount of thinking and work that has gone in. The first hint of air was greeted by excellent use of the feet to get to the pitch, not necessarily always in attack. Shortness in length galvanized a backward movement, with gaps in the heavily populated on-side the target area. When the quicks pitched it up, Rahane moved gracefully forward to drive through the covers, careful to ensure that he wasn t just hands like in the first innings, and when Mitchell Starc in particular tested the bounce in the surface, he rocked back and pulled attractively as well as effectively. The result was pleasing; the runs ticked along as India built a substantial lead, Pujara s twin efforts of 123 and 71 finding validation through Rahane s eye-catching 70.

It was in Australia that, four years back, Rahane out-batted and outshone Kohli, himself batting like a dream, at the MCG. During a rip-roaring fourth-wicket stand of 262, Rahane was clearly the marauder, smashing 147 in just 171 deliveries with 21 brilliantly executed fours. Seldom have Australia, their attack manned by Mitchell Johnson, Ryan Harris, Hazlewood, Shane Watson and Lyon, looked more clueless, than that December afternoon as Rahane unleashed carnage. From there to now hasn t entirely been a journey fulfilled, but then again, it is a journey that is hardly near its end. As Sunday reiterated. 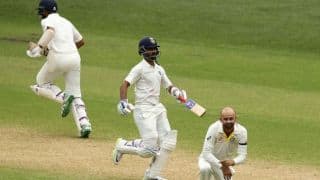