Ajinkya Rahane — the name brings a sigh of relief for every Indian who thought their team may never find an adequate replacement for the legendary VVS Laxman. Mumbai-born Rahane, in his short career, has already shown flashes of brilliance which Laxman would have be proud of. Just like his predecessor, Rahane enjoys batting overseas — a quality that differentiates him from the rest. Before the series against South Africa last year, he had only played a solitary Test at home, and had played the rest 17 Tests away. And just like Laxman, he had an average in excess of 40, clearly indicating how good a batsman he is. ALSO READ: Happy b’day, Rahane! India vice-captain in Tests turns 28

On the eve of his 28th birthday, R Narayan brings to you five terrific knocks from Rahane, that not only helped him establish himself in the international circuit but also to elevate himself as the vice-captain for India’s next tour. From his valiant 96-run knock against South Africa at Durban to an unbeaten century against them at Delhi, let us take a look at Rahane’s best so far:

1. 103 against England at Lord’s: India were put into bat on a track so green which made it difficult to differentiate from the lush field, that too against an England bowling unit comprising of James Anderson and Stuart Broad. And as expected, every Indian batsman struggled to get going, barring Rahane. His second century of his career was probably his best knock, considering every other batsman in the top 8 failed to get past 30-run mark. But Rahane stood tall, and scored 103 to propel India to 295 in the first innings which ultimately was the key in their historic victory at Lord’s after 28 long years. ALSO READ: Ajinkya Rahane: I love facing challenges and responsibilities

2. 147 against Australia at Melbourne: Having seen Australia post a mammoth 530 in their first innings, pressure was on India. Murali Vijay showed great promise before getting out for 68. Out came Rahane, and formed a massive partnership with Virat Kohli for the fourth wicket to help India avoid follow-on, and reach 465. The highlight of the innings was not Kohli, but Rahane, who scored 147 of just 171 balls to relieve pressure from the other end. It was an innings which helped India draw the match and keep the series alive.

3. 126 against Sri Lanka at Colombo: India had a lead of 87 runs in their second innings. Vijay was on-song,, scoring a well-made 82. Along with him, Rahane played a match-winning knock of 126 which helped India set Sri Lanka a target of 413. Just like earlier times, most batsmen failed to get big scores, but Rahane stuck to his task and helped India win the game.

4. 127 against South Africa at Delhi: Another occasion when most other batsmen failed, Rahane took the responsibility. India were reeling at 139 for 6 before Jadeja and Ashwin supported Rahane with their cameos. But at the end of the day, it was his 127 which made the world’s difference, and took India out from a treacherous situation.

5. 96 against South Africa at Durban: Just into his 3rd Test, Rahane showed the other batsmen how it is done. Despite India losing the match, he was the lone fighter for the side. In the first innings, he stayed till the very end scoring 51 to help India reach a respectable 334. But it was in the second innings where he displayed his utmost talent. With every other batsmen failing, he carried on. His 96 could not help his side save the Test, but made sure India did not lose by an innings. This was the innings where it was certain he had the talent to cement his spot in the team for years to come.

Virender Sehwag takes a dig at Pakistan; requests their fans not to break TV sets 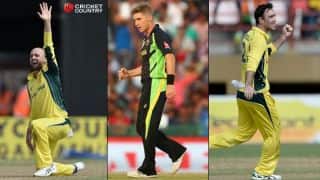