Let’s have a look at the key moments that changed the game for Australia and England in the 1st Test at Cardiff.

England beat Australia fair and square in the first Test by 169 runs. Such was the manner of capitulation from Australia — a defeat in four days —that it became embarrassing for the side that had won the last Ashes series 5-0. Nikhil Popat picks the five key moments from the game that turned it in favour of the hosts.

When Australia arrived in England, there was a lot of noise over the average age of the touring party compared to their hosts. Jason Gillespie merely stated a fact and it hurt the Australians so much that captain Michael Clarke had to resort to giving it back in a way only he could, when he introduced his teammates during a dinner at Australian High Commission mimicking the Dad’s Army. Unfortunately for him, it quite turned out to be one of the major reasons for Australia losing the first Test. REPORT: England thrash Australia by 169 runs in Ashes 2015 1st Test at Cardiff

Australia beat Kent and Essex by huge margins and that may have sent them into a false sense of security of being ready for England. England were playing a positively refreshing brand of cricket and Australia were caught napping. Ryan Harris retired just before the start of the Ashes 2015 and was confident that Australia would not miss him, but if his team missed anyone, it was him. Scorecard: England (ENG) vs Australia (AUS) Ashes 2015 1st Test at Cardiff, Day 3

Let’s have a look at the key moments that changed the game for Australia and England. READ: Ashes 2015, Cardiff: Tale of Two Tails

Brad Haddin’s drop: Brad Haddin has not been the best wicketkeeper for Australia and it was about time they looked for someone better behind the wickets with the age not being on his side. Australia had made the new ball talk on Day One with flurry of wickets and Joe Root had just come in, and gifted Australia a sitter on only his second ball, but Haddin dropped it. It was a regulation catch and should have been taken. That drop cost Australia not just ascendancy but also a lot of runs, 134 of them. READ: Australia must learn to thrive on flat decks

Moeen Ali’s counter-attack: Australia were threatening to comeback in the game with late strikes on Day One, but Moeen Ali and Stuart Broad were unbeaten at stumps. Moeen then counter-attacked and with his 77 ensured that England had more than 400 on the board, something that was really important in the context of the game. Moeen’s attacking innings helped England keep Australia on the field and tire their bowlers more than they might have expected, when they had England six down for 293.

England’s back-up backs up: England have often searched for good back-ups to James Anderson and Stuart Broad and it worked for them in this very game. Australia were steady having lost David Warner early in the first innings. They were past 100 for the loss of just one wicket and Alastair Cook turned to Moeen —the guy who had Indians in trouble with his non-spinning deliveries. Smith went after him but fell for the bait. Mark Wood then chipped inas he had Chris Rogers caught behind. Rogers was batting fluently and was on 95 when he was dismissed. Michael Clarke was caught and bowled after a start by Moeen. Suddenly from being 129 for one, Australia were 4 down for 207.  This effort from Moeen and Wood helped England restrict the Australians and get a first innings lead of 122 runs.

Root, Bell deliver final blow:  Australia knew they were behind and were making the new ball talk in the second innings. They had England 73 for three and any further wicket would have put Australia on top, but Root who had a superb first innings, came in the way again. He combined with Ian Bell to share a 97-run stand that gave England the much-needed platform and got them to safer shores. Root and Bell both scored 60 runs each.

Cook’s masterstroke: Michael Clarke is often touted as the best captain for his aggressive instincts but they did not seem to work on pitches which did not provide his pace bowlers with pace and bounce. Cook, at home, planned better and was patient enough but just when things started to go out of hands for England towards Lunch on Day Four, Cook played his masterstroke. David Warner scores quick runs and he had just got to his fifty and was looking set. He could have taken the game away from England but Cook brought on Moeen and the bowler struck gold when he had Warner leg before at the stroke of lunch. Australia then went from being 97 for one to 122 for six and never recovered to eventually lose by 169 runs. 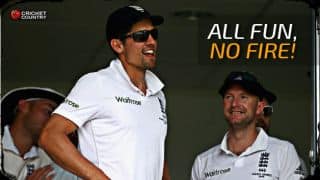