Ultimately Afghanistan lost their encounter against Pakistan by 72 runs.

Ultimately Afghanistan lost their encounter against Pakistan by 72 runs. However, not before giving their opponents a thorough scare. Arunabha Sengupta writes that the fledgling cricketing nation scored high against the parameters of zest, heart and belief.

The end result tells less than half the tale. The story finally emerged out of the coarse grains of the mundane and the inevitable. It was smeared in drab realism, the expected triumph of experience over enthusiastic talent still palpably raw.

The 72-run win of Pakistan over Afghanistan was predictable, a plot that remained fixed along the axis of reality, refusing the delightful twist that would have ensured a fairy-tale. Yet, for a large part of the Pakistan innings and at least the first few overs of the Afghanistan response, the drama showed distinct signs of spilling into the realm of fantasies.

An encounter between the two countries would have never been a simple game of cricket. With the many-textured ties that bind the two nations — quite a few of  them twisted and painful — the stakes would have always been  much more than the points awarded for a win.

As Afghanistan took the field in their first major ICC One Day International (ODI) tournament, the hopes and trepidations of the war-ravaged nation throbbed with every step taken by the cricketers. Cricket is a brilliant cone of light that seems to have filtered through from a future of promise after decades of death and darkness. The very fact that Pakistan was the opponent added to the intrigue — the neighbouring nation, in many ways the breeding ground of their terrifying tormentors. Yet, it was the same Pakistan that provided the country with the craze for the game and the cricketing mentors.

For a considerable while during the match Afghanistan seemed to live through a beautiful dream. It was as if destiny had turned a bend and was thoroughly siding with them. On a slow pitch the Pakistan batsmen were shackled. The bowling sparkled from many angles, even if the edges were distinctly rough. The meaty opening partnership between Sharjeel Khan and Ahmed Shehzaad did not put them off their quest. When the runs were stopped to a trickle and wickets fell at a steady rate, it was Pakistan who looked on the verge of a nasty jolt.

As the score stood at 117 for six, every Afghan heart that had dared to allow a flutter of impossible hope now quivered with fervent expectation.

Among all the promise, it was the wicketkeeper Mohammad Shahzad who perhaps provided the most poignant image of the day. He had already flung himself through the air to catch Sharjeel off what had seemed to the glove, although umpire Johan Cloete had remained unmoved. Later, when dreadful calling by Sohaib Maqsood resulted in captain Misbah-ul-Haq ending up beside him, the ebullient Afghan stumper ran down the wicket, the full 22-yards to break the stumps at the non-striker’s end. It was a run of unbridled joy, of the absolute glee of sporting success.

Years earlier, when asked  about the pressures of the game, former World War Two fighter pilot  and champion all-rounder Keith Miller had supposedly responded, “Pressure is a Messerschmitt up your arse, playing cricket is not.” In that particular elated sprint of Shahzad, one perhaps witnessed the famous words come to life.

All through the run down the wicket, one seemed to see the relief of a nation captured in the blithe strides — at last free from the debris of destruction, exchanging the Kalashnikov for the willow, running towards a future that reverberated with cheer rather than the relentless salvo of gunfire.

Of course, Pakistan managed to wriggle out of the situation. The Afghans let slip the all-important catch off Akmal at 28, and the batsman manufactured a get-out-of-jail innings of 102. Pakistan ended up with a decent enough 248. But nothing can be taken away from the efforts of the men playing only their third ODI against a Test playing nation.

When they chased, the Afghanistan batsmen missed adequate experience to pace the innings, but never lacked the heart.  They conserved wickets for much of the response, sacrificing tempo for the sake of preservation, but lost their men in a flurry when trying a bit too late to recover lost ground.

Yes, in the end, the fledgling cricketing nation was defeated — comprehensively according to the final scoreboard.Yet, remarkable high scores were notched up, against the parameters of zest, belief and confidence that do not find their ways to the Wisden. 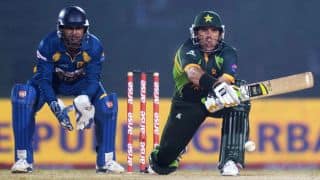