Day One was full of pain, cheer, anguish and ecstasy for both Australia and South Africa as the visitor's look set to take a mammoth first innings lead over their languishing hosts at Hobart.

Australia and South Africa clashed in the second Test of the three-match series at the Bellerive Oval at Hobart. Australia would have hoped for an improved outing that from Perth, where they were outplayed in all departments to be handed a 177-run loss. Australia tried out a handful of changes in their playing XI, calling in two debutants in Joe Mennie and Callum Ferguson, along with Joe Burns, to revive their sinking ship. Winning the toss, Faf du Plessis asked the hosts to bat first, a decision which yielded amazing results. South Africa powered by Vernon Philander and Kyle Abbott dashed hopes of the hosts of a memorable comeback notching up 8-wickets between them to bundle the home side for 85 runs. South Africa in reply struggled as Mitchell Starc inspired Australia kept control in the flow of runs limiting the visitors’ to 170 for 5 taking a lead of 86 runs at stumps on Day One. LIVE CRICKET SCORECARD: Australia vs South Africa, 2nd Test at Hobart

Day One was full of pain, cheer, anguish and ecstasy for both the teams, let have read about some of the key highlights that we witnessed.

Vernon Philander-Steven Smith collision: Australia were reeling down the effect of Vernon Philander running wild over their top-order batsmen with snatching 3-wickets in the first half of pre-lunch session. Steven Smith came into bat at No.3 saw his teammates come in and go quickly as wickets kept tumbling. Philander was bringing the ball into the batsmen, which caused problems for Smith as well. Smith playing down the leg-side missed the ball, which crashed into this pads to which Philander applied for a leg-before.

Smith trying to pick a quick single ran, as Philander with this back to the bowler kept moving forward in his appeal. Unknowingly, both Smith and Philander collided into each other were the latter got his right shoulder in a bit of a fix. Philander soon went back into the dressing room for a quick treatment much to the relief of Australian batsmen.

Vernon Philander’s 5-for: Vernon Philander post-tea came back and downed Australia batsmen even more to hand himself his 10th career 5-for. Philander started the bowling for Africa, and struck in his first over, getting Warner off an edged a simple catch to Quinton de Kock for 1. Philander egged on by helpful conditions, struck 2-in-2 getting the key wickets of Usman Khawaja and Adam Voges.

Philander, post-tea, nabbed Joe Mennie for 10 who showed glimpses pf his batting hitting a few extravagant drives. Philander picked his fifth and Australia s final wicket in the form of Nathan Lyon for 2.

The Fergu’sons’ anguish: Playing for ones’ country is a very big achievement and calls for a family reunion and that is what the Ferguson family did at Hobart. Callum Ferguson was in-line to make his Test debut after 12-seasons in First-Class cricket. Ferguson was handed the Baggy Green cap by Ben Hilfenhaus. To Callum’s luck Australia did not start well and the debutant was out facing Philander and Kyle Abbott in the eight over itself. With conditions tough Callum’s survived much to the pleasure of his father and brother sitting in the stands. Callum went for a cheeky second-run towards backward point after Dane Vilas misfielded. Vilas was quick to retrieve and throw the ball straight into the gloves of QDK, who uprooted the bails in a flash.

Callum was found to be short of the crease as he took a bit of a time to comeback of the second run, causing anguish to his family, who are all gutted. His brother who landed from England, was seen in anguish leaving the stand in disdain.

Steven Smith’s resolute: With his team looking in disdain skipper Smith took upon himself to provide some resistance for his side. Smith batted against Philander and Abbott who were in terrific touch, and weathered any storm they threw up. Smith looked fidgety in the middle, shuffling a lot around the crease. Smith got behind the ball while defending and went on-a-full blown attack to achieve ball for boundaries. ALSO SEE: Watch how Australian innings folded for 85 against South Africa at Hobart

Smith was the only top-order batsmen to get into double figures, which include the likes of David Warner, Adam Voges and Usman Khawaja. Smith remained not-out on playing 80 balls for his 48*

Mitchell Starc’s thunderbolts: South Africa started well with openers Stephen Cook and Dean Elgar shielding their team against the attack of Starc and Hazlewood. Both enabled South Africa to take tea at 43 for 0, with only 42 runs adrift the hosts. Starc must have had some energy booster that he rocked South Africa in the first over post-tea. Starc struck in the very first ball nabbing the wicket of Elgar as the ball came back into the batsman and crashed into his pads on middle and leg stump line. Second wicket to go was Stephen Cook, who due to poor shot ended a resilient innings of 23.

Starc struck again in the form of JP Duminy. Duminy, trying to play away from his body, showed no feet movement, and nicked the ball to the fielder at slip for 4-ball 1. Starc’s 3-for meant that South Africa were reeling at 46 for 3 an over into tea. 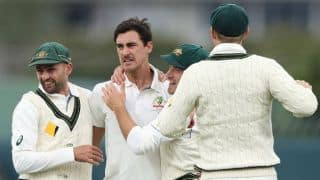 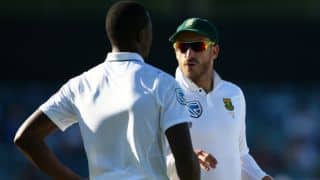