South Africa inspired by Kyle Abbott and Kagiso Rabada recorded their third successive series win against Australia in Australia after winning the 2nd Test at Hobart by an innings and 80-runs.

South Africa knocked off the remaining 8 Australian wickets early into Day Four to register an innings and 80-run win over the hosts helping them clinch the 3-Test series 2-0. South Africa have been dominating Australia since the start of Test series, first a commendable win at Perth and now an emphatic win in the second Test at Hobart. Australia was outclassed across departments, much to the misery of their home fans who fought out rain and wet conditions just to get a glimpse of their cricketing heroes to show no vindictiveness. Australia were still in the game heading into Day Four after Steven Smith and Usman Khawaja weathered out late South African storm on Day Three. With only a 121-run deficit to overcome Australian batsmen once again collapsed against the skilfulness of Kyle Abbott and Kagiso Rabada. FULL CRICKET SCORECARD: Australia vs South Africa, 2nd Test at Hobart

Kyle Abbott’s magical 6-for: Kyle Abbott rocked apart the Australian batting order to pieces on Day Four to initiate a collapse. Overnight batsman Usman Khawaja had already struggled to find peace with the bat in the middle against seaming ball, somehow managed to get to his half-century.

Starting his innings on 56 Khawaja was continuously beaten by Abbott in the early few overs. After getting hit by a lucky boundary towards the gully region, Abbott bowled a back of the length ball to which Khawaja went to slash hard away from the body. Abbott extracted a hint of bounce that outdid Khawaja and caught the thick edge and into the comfortable hands of Quinton de Kock.

Abbott struck again a few overs, as Adam Voges continued his horrific run with the bat. Voges misjudged the length of the ball was caught in two-mind. Voges did nothing, neither did he pull or leave the ball at large; the ball took the top edge of the bat and into the hands of JP Duminy.

Abbott rightfully grabbed the final two wickets of the match. His fifth wicket came in the form of Mitchell Starc, who just swung his bat at everything to no use what so ever. Abbott bowled a fuller length ball to which Starc obliged and gave a simple catch to QDK for a duck.

Abbott handed South Africa the win by cleaning by Nathan Lyon and putting an end to the horrible show by Australia. Lyon trying to hit over the top handed Vernon Philander a simple catch, to hand Kyle Abbott a magical 6-for in the match.

Kagiso Rabada’s fiery spell: Kagiso Rabada, the star for South Africa at Perth, was yet to shine his light in this match. Rabada bowled superbly on Day Three only to go wicketless throughout. Rabada on Day Four remained unplayable for most the morning , saw his teammate wreak havoc over the hapless Australian batting decided to join the pleasantries. Rabada s first wicket of the day was Callum Ferguson, who was making his debut for Australia. Ferguson much like Adam Voges fell to his own indecisiveness.

The ball seamed into the batsmen from back of a length to which Ferguson was not sure to duck or leave, found the bat to be hanging midway for the ball to take a hit and land up in the hands of third slip. Rabada soon snatched Peter Nevill, whose 16-ball stay looked ugly.

Nevill in a bid to fend off a bouncer managed to edge it to the third slip fielder who caught the ball with ease. Rabada cleaned up another debutant for Australia in Joe Mennie, who fell victim to a fuller ball. Jennie played down the wrong line, missing the ball completely and left his pads exposed for the ball to strike it.

Steven Smith lone-ranger innings: The only batsmen to provide some credibility to the Australia side was skipper Steven Smith, who took as many as 40-minutes to score a run on Day Four. Smith kept on putting a brave face for his side, only to see a stack of batsmen fall like nine-pins on the other end. With seven wickets down already, Smith dismissal would have surely added the final nail in the coffin, and Rabada just did that when he got skipper for 31.

Rabada invited Smith to drive on the up, keeping the ball in the off-stump line, to which Smith could not resist. Smith ended up giving keeper de Kock an easy catch and the series to the South Africa. 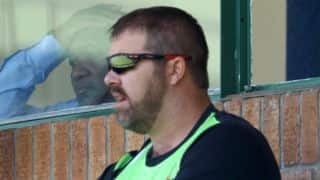