The visiting nations are set to lock horns for the first time in the series. Australia have already registered a win in the tournament and South Africa are yet to open their account in the Tri-nation series. They were beaten by Sunil Narine and Kieron Pollard’s heroics in the previous match. Australia will be high on spirits after beating hosts West Indies in the a rather one-sided affair in the second match of the series. They outclassed the hosts by beating them in every department of the game. Nathan Lyon and Adam Zampa were responsible for sending six batsmen back to the pavilion. They will be looking to enforce similar tactics against South Africa as the latter struggle against the spin as well. AB de Villiers and Co. will need to take their game up a notch to give themselves a chance to win this match and get back in the Tri-Nation series. That will depend on how they tackle and put pressure on Australian players early on.  Full Cricket Scorecard: Australia vs West Indies, Tri-Nation Series 2016, Match 3 at Guyana

David Warner vs Aaron Phangiso: This comparison might be a little harsh on the youngster Phangiso . However the South African took 3 wickets in the first match against West Indies. Warner on the other side has carried forward his form from Indian Premier League (IPL) 2016. He scored a run–a-ball 55 in the first match against West Indies to put the hosts under pressure straight away. Although, his form has been outstanding in recent past but he will be tested against youngster Phangiso as Guyana pitch seems to help the spinners. ALSO READ: AUS vs SA, Tri-Nation Series 2016: Predictions and Preview

AB de Villiers vs Nathan Lyon: The skipper too had a good time in IPL 2016 being the third highest scorer in the tournament. He is the most experienced member in the side and needs to lead the team from the front. He has some experience against spin and will be expected to build partnerships in the middle. Lyon was the star bowler for Australia in the previous match, thrashing their middle-order and not allowing them to get any momentum after a faulty start. He will be tested against the AB seeing the form he has been in recently. ALSO READ: Nathan Lyon, Adam Zampa, Glenn Maxwell: Australia’s spin woes finally have answers

Hashim Amla vs Mitchell Starc: Amla will be facing the wrath of Starc early on in the innings and needs to stand his ground against his fierce spell. Starc has made a comeback in the team and his presence has strengthened Australia’s bowling attack. He was remarkable in the previous match against the hosts picking up the wickets of openers, Johnson Charles and Andre Fletcher. Amla needs to keep hi wicket intact and then attack the Australian bowling spearhead.

Adam Zampa vs Rilee Rossouw: Zampa was phenomenal in his spell against West Indies picking up 3 wickets to wrap up the innings quickly. He became the only spin bowler this season to pick up 6 wickets in a match in the history of IPL. He will be bowling to Rossouw in the middle overs. Rossouw made a half century in the last match and will be looking to produce a similar innings to build a platform for his team to put a huge total on scoreboard.

Imran Tahir vs Steven Smith: Tahir picked up 2 wickets in the previous match against West Indies. Khawaja has been shifted from his usual batting spot No.3 batsman to No.4 due to Usman Khawaja in the side. He will be facing Tahir a lot in the middle overs who will try to take the ball away from him. Guyana’s pitch will help spinners and it will be great to watch how Australian skipper, Smith tackles Tahir. 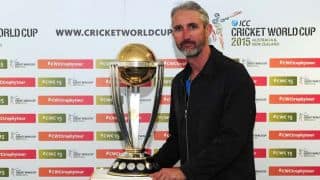