Steven Smith might not change his winning combination of playing XI for the second match against South Africa.

After Australia’s convincing win at Guyana in the second One-Day International (ODI) of the Tri Nations series, Steven Smith and Co. will aim to march forward with the same momentum. South Africa come next in their opponent list in the series as both the sides lock horns in the third match at the same venue of Providence Stadium, Guyana. While South Africa will look to reciprocate after an embarrassing defeat in the opener, the Australians will be high on confidence, courtesy of their all-round show that helped them defeat West Indies by 6 wickets. Every member of the playing XI contributed his bit in the win which is why Smith might not change his XI for the second match against the Proteas. Full Cricket Scorecard: Australia vs West Indies, Tri-Nation Series 2016, Match 3 at Guyana

Top-order: Australia’s batting strength lies at the top with in-form David Warner and Aaron Finch opening the innings for them. The Australian vice-captain has been in tremendous form in the last couple of months. The Indian Premier League victory as Sunrisers Hyderabad’s skipper has added to his confidence which will surely manifest positive results on the Australian mark sheets. Warner has been averaging above 50 in the ODIs since the 2013 season which speaks volumes about his potential.

His scores of 55*, 16, 98, 12 and 122 in the last five ODIs demonstrates his current form. If he gets going, there is little South Africa can do to stop him. On the other hand, Finch was seen struggling in the previous match, scored 33-ball 19. If Warner is on fire at one end, Finch just has to play the second fiddle. Usman Khawaja comes in at the all-important No.3. Although he managed only 41-ball 27 in the first game, he undoubtedly is capable of a better knock.

Middle-order: Australia has an upper hand most of the times because their batting goes down till No. 9 at least. The likes of Smith, Glenn Maxwell and Mitchell Marsh fall next in the line-up. All the three are game changers. If the top order fails on a particular day, the trio in the middle steps up to take the charge. West Indies however dismissed Smith and Maxwell cheaply for 6 and 0 respectively. READ: AUS vs SA, Tri-Nation Series 2016: Predictions and Preview

Both the players had withdrawn from IPL 2016 mid-way due to injuries and will take time to get back to their best. The Proteas must take advantage of the little weaknesses this No.1 side has at the moment in order to dominate them.

Bowlers: Australia have always been dependent on their fast bowlers. The return of Mitchell Starc after a long break came only as a booster. Starc made a breakthrough in his very first over which gave out the message that he has returned to conquer the batsmen from the very start. He has the support of Marsh and Josh Hazlewood, while the spin trio Maxwell, Adam Zampa and Nathan Lyon has given a new picture to the Australian bowling attack. READ: Nathan Lyon, Adam Zampa, Glenn Maxwell: Australia’s spin woes finally have answers

The likes of Zampa, Lyon and Maxwell shared 7 wickets between each other with Zampa and Lyon having claimed 3 each. The returning Starc would have been happy with his performance as he bagged 2 sclaps, bowling 9 overs. Overall, Smith will be a carefree captain at the moment with every ingredient required for a win in place for him. The performance in the opening game against West Indies has certainly made Australia the favourites for their fixture against South Africa.

Virat Kohli to don a new hat; will sing for AR Rahman 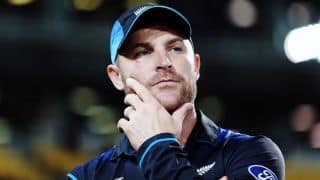