Azhar's story revolves around former Indian captain Mohammad Azharuddin and his involvement in the match-fixing scandal.

It was indeed a pity that the career of former Indian captain Mohammad Azharuddin had to end the way it did marred by match-fixing allegations a blot on an otherwise magnificent career. In the movie Azhar, where Emraan Hashmi plays lead role, the story revolves around him and his two wives Naureen (Prachi Desai) and Sangeeta (Nargis Fakhri), and of course some cricket squeezed in between. To be fair, Hashmi does try his best to replicate Azhar’s mannerisms on and off the field, be it the way he walks or the way he plays those elegant flicks on the leg side. READ: Azharuddin: Had to make lot of changes in Azhar’s script

The story starts off with Azhar’s maternal grandfather’s (Kulbhushan Kharbanda) dreams of his grandson representing India. Azhar loses his grandfather just before his selection trials, but despite being emotional, he plays an excellent innings for South Zone against North Zone and is eventually picked for the Indian team. He scores three tons in his first three Tests and is given a hero-like status across the country. READ: Mohammad Azharuddin walks out of interview after being questioned for match-fixing

There is also a scene where former BCCI President Raj Singh Dungarpur calls on Azhar and asks him, Mian, Kaptaan Banoge? which was actually asked by him before handing him the captaincy, ahead of senior players like Kapil Dev, Dilip Vengsarkar, Ravi Shastri and Manoj Prabhakar in the side. It was a touching moment indeed.

Azhar’s personal life takes a major slide when he falls in love with Sangeeta when they are away in London, shooting for an advertisement. But despite agreeing not to pursue it any longer, Azhar makes things worse after he dedicates a Man of the Match award to Sangeeta and not his wife Naureen (which, of course, was a fictitious event). READ: Mohammad Azharuddin biopic: ‘Azhar’ movie actors launch ‘#AzharAnthem’

But the plot is eventually clear. After his 99th Test, Azhar is accused of throwing three matches between 1996 and 1998. Suddenly, he is not given the respect he once used to get. But Azhar still has a good friend, who conveniently happens to be a lawyer. Reddy’s (Azhar’s lawyer) college junior (Lara Dutta) is out on a mission to get Azhar behind bars to set an example to other cricketers. She mentions more than once that she used to be a huge fan of Azhar. Reddy then points flaws in all the initial reports like the initial Justice Chandrachud Report and the CBI report.

After eight years of trial, Azhar’s name was eventually cleared, as he was banned by the ‘Indian Cricket Board’, which set up the committee to decide whether Azhar was guilty or not.

Characters like Prabhakar and Shastri have been portrayed in somewhat vivid manners. Prabhakar, who in reality wanted to expose the entire match-fixing drama in the early 2000s, was made out to be the kingpin of the entire match-fixing incident. Shastri, on the other hand, has been portrayed as a womaniser, who cheated on his wife. READ: Ravi Shastri to be portrayed by Gautam Gulati in Mohammad Azharuddin biopic

The likes of Ajay Jadeja and Nikhil Chopra, who were among the five banned for five years, do not find even passing mentions in the movie.

The makers perhaps went a little overboard when they showed that Azhar accepted Rs. 1 crore from a bookie ahead of a final against Sri Lanka, which he accepted on the grounds that no teammate of his would be approached by the same bookie. Despite agreeing to throw away the match, Azhar plays an excellent knock and takes India home.

Overall, it is sure to keep everyone hooked, but the audience should not conclude that the events in this movie adheres to reality. The Court may have cleared his name, but there are still many questions unanswered. 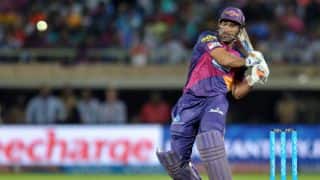