Azhar Mahmood believes Pakistan bowling line-up in ODIs is a very inexperienced one and that has to be understood by observers.

Writing in his latest blog on PakPassion.net, Pakistan all-rounder Azhar Mahmood discusses his own contribution as bowling coach and the performance of Pakistan’s limited-overs squads in the recently concluded series against England, views on the impressive bowling efforts of Mohammad Aamer and Hasan Ali and why he is not concerned about undue criticism of his own performance by some media. READ: Vaughan: Misbah deserves lot of credit for the way he has captained PAK

Pakistan’s bowling in the ODI series

You have to give credit to the England batsmen in the way they batted during the series. Nowadays in ODIs 300 is a par score and if you see the recent scores in fifty over cricket at grounds like Trent Bridge, then you will note that around 380 is a par score there. If you then drop as many catches as we did in that match at Trent Bridge that will go against you especially if you start dropping catches from the very first over. Whilst the bowling is under the scanner for obvious reason, the ground fielding and the catching was simply not up to the mark at times as well. In the first three overs at Trent Bridge we gave away three boundaries with sloppy fielding which added more pressure on us. Also at times during the ODI series our body language was not great and the lack of aggression and intent was lacking which is very disappointing. READ: PAK vs ENG: Tour full of peaks and valleys, ends with vital questions

The Pakistan bowling line-up in ODIs is a very inexperienced one and that has to be understood by observers. Having said that the inexperienced bowlers by and large bowled well and responded very well after the Trent Bridge match and we could have won the last two ODIs, but unfortunately at Leeds Irfan got injured just at the wrong time. Who knows if Irfan had stayed fit in the fourth ODI then we could have ended up winning the last two matches of the series. At Cardiff our bowlers bounced back really well in the last ten overs to restrict England because at one stage they looked like they would reach 350 or more.

In the last three matches of the tour we only bowled one no ball which is a very positive sign and a huge improvement on the earlier part of the tour and it was very encouraging for me to see. I gave the bowlers some plans and they responded very well to those plans. I told the bowlers that we needed to change the focus and show some aggression and play for pride and I think we did that really well. In the last three Limited-overs matches we showed the right attitude and mindset; something that was lacking in the earlier ODIs.

We had a long chat as a group after the third ODI at Nottingham. Sometimes a match like the one at Trent Bridge can become a reality-check for everyone. That match was a reality check for our bowlers individually and collectively. I’m not going to say that I waved a magic wand and we bowled very well at Old Trafford but we worked on a few things after the third ODI and the results for the bowlers were there for all to see in the later stages of the tour. Mindset, aggression levels and attitude were all discussed ahead of this match. I made it clear to the bowlers that you cannot stop batsmen from scoring runs but the best way to stem the flow of runs is by taking wickets; so just look to keep taking wickets. READ: Akram impressed with Pakistan’s performance in one-off T20I

The body language was very good in this match and Sarfraz Ahmed led the team very well. To me, that was simply a continuation of the attacking attitude which Azhar Ali had put into action as captain in the last two ODIs. Mickey Arthur and the rest of the coaching staff told the boys that you have to go out there and play positive cricket and that was definitely achieved. The players deserve a lot of credit for that match and the efforts they put in and for their much-improved show in the last 2 ODIs compared with the earlier games. The boys throughout the tour never let their heads drop, their attitude was spot on and their work ethic was evident and they kept on going throughout the tour so they deserve high praise for their efforts.

Unfortunately he got cramps at the ODI in Leeds which can happen to anyone. Cramps normally come about due to nerves, soft ground or a poor diet. He’s been clearly told to go back to the NCA and work very hard on his fitness. However, we have to understand that Irfan’s body type is totally different to most people. It’s a shame as he was bowling well and running in hard and was looking fine. It could be that the weather change during the day affected him as it was very hot during the day and the temperature really dropped at night. READ: PAK vs ENG 2016: PAK marks out of 10 in ODIs

I never got a chance initially to properly work with the likes of Wahab Riaz after the Test series as those guys were so tired and their workload in terms of practice sessions was reduced. Then when Wahab was rested for two matches, it gave me the opportunity to work properly with him on a couple of technical aspects regarding his bowling action. After that he bowled a ball that was 96mph, which was the fastest by him throughout the tour and he looked a much better bowler in those later matches.

I saw him bowling in the Pakistan Super League (PSL) and he impressed me very much there. I said it then that this guy has got something special about him. I said to Mickey Arthur the other day that he reminds me of myself as a bowler when I started. He has potential, he has everything. The thing about him that I really like is his attitude is right and he wants to learn. I have no doubt about his ability and he has a very bright future. But he needs to remain calm, positive and keep learning. He can swing the ball both ways, swing the new ball and the old ball and he has all the variations. We are working with him on a couple of things like using his front arm more and I think with some minor adjustments he will be an even better bowler.

Despite all of the catches dropped off his bowling, he never stopped running in and giving his all in every match and every spell and for that he deserves credit. His determination and his fitness was outstanding throughout the tour. If the catches off his bowling had been taken in the Test series then his average for that series would have been in the low twenties. He’s a positive lad and he knows that a bowler needs some luck. He’s bowling well, he’s working hard and he knows that there will be days in future where he doesn’t bowl so well but still gets wickets, so he has to remain patient and the wickets will come.

His workload needs to be monitored as he is playing in all three formats but rest assured, every one of the captains wants to have him in his side. Give Aamer the ball and he will do something is what the captains are thinking. Give him the new ball or the old ball and he will run in and bowl his heart out and do his bit for the captain. His fitness is getting better and better though and I think he’s over the hardest part of his comeback but yes, his workload definitely needs to be monitored. READ: Pakistan’s bid for ICC Cricket World Cup 2019 spot must begin now

I enjoyed working with Mickey recently. He’s very positive and wants to take Pakistan cricket forward and to the top and make some positive changes. I learnt a lot from working with him and Steve Rixon. Mickey wants to make changes to the mindset and the attitude of the players and instill an aggressive mindset into the players. He wants his players to go out there and express themselves. He also wants the players to be very fit and I believe he is the right man for the job. His training sessions were very structured, short and sharp and there was none of this practising for hours on end.

Targeted by some media

Frankly I don’t care what certain sections of the media have to say about me. I’m happy with my work and efforts. I’m working honestly and with integrity. If my players are happy with me and learning from me this is more than enough for me. When the boys do well I don’t want any credit as it’s the players who deserve the praise. I reiterate it’s my job to give the boys plans and it’s up to them to make sure they follow those plans. I can prepare the bowlers off the field, on the field it’s down to them to deliver on the field. Coaches can prepare the players, give them plans, they cannot go out there and perform for them. It’s the player’s responsibility to do the business on the field. READ: A fairer approach to Pakistan Team selection is needed: Faisal Iqbal

I’ve really enjoyed the responsibility of the role in England for the limited-overs matches and of course would like to continue the role. We will get a clearer picture in the next few days as to whether I will be in the role for the series against West Indies in UAE. 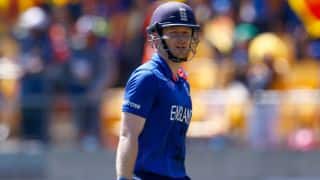