India’s overseas losses to be probed to prevent similar disasters at home and in the IPL.

In a strong move to resurrect Indian cricket, The Board of Control for Cricket India (BCCI) has called for a thorough probe on India’s performance in overseas Tests. And in order to do so, they’ve chosen none other than Justice Mukul Mudgal. While Mudgal committee is busy probing the Indian Premier League (IPL) spot-fixing controversy, the board officials have chosen to add MS Dhoni and co. in the mix. The board has already given a small dose when news came out that the Mudgal committee is going to question a few Indian players.

“It has been such an embarrassment for the country. Thankfully it has happened overseas. Imagine if India play at home with this kind of mindset. And God forbid, if Indian players play this way in IPL, then Indian cricket will be in a big mess. Hence these overseas defeats need to be investigated,” said Dhananjay Patel, secretary of BCCI.  “We have already taken the first step by inducting Ravi Shastri as Team Director.”

“Moreover, if the player is found to have not taken any efforts in the nets and is in poor form, he will not only miss West Indies series but will also miss next year’s IPL,” added Patel.

This news has rattled the Indian team. Practicing for the One-Day series against England, it was observed that Virat Kohli and Shikhar Dhawan were trying to contact prominent Indian politicians. According to unconfirmed reports, both Kohli and Dhawan are seeking advice from Indian politicians on how to buy clean chits from probes.

However, The Flying Freak, CricketCountry’s Correspondent at large, has found from reliable sources that this is a ploy from BCCI to divert the attention from the fixing probe.”By getting Justice Mudgal to probe, we not only distract the spot-fixing probe but we can also feel assured that probing long list of India’s overseas defeats will take more time than a regular Indian probe which takes a minimum of two years and an additional year to actually implement the suggestions,” revealed the source on condition of anonymity. 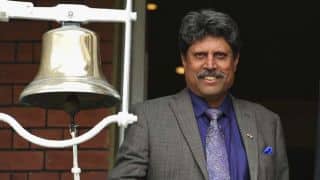