Bedi has delved into his vast stores of recollections to criticise Dhoni and Fletcher.

Bishan Singh Bedi has predictably come down on MS Dhoni and Duncan Fletcher like a ton of bricks. While the disappointment with the Indian team makes fans lap up the comments, S Chuzzlewit looks at the many facets which make them a trifle hard to digest.

As expected, Bishan Bedi has come down like a ton of bricks on the Indian coach and captain after the reversals in South Africa and New Zealand.

He has been scathing, vitriolic, merciless — all that characterises this veritable personification of the match-ka-mujrim psyche, the angry old man of Indian cricket. In other words all that one expects from Bedi.

However, there is little evidence to suggest that he has really followed the matches closely. His comments, on the contrary, seem to pour forth from his convictions and his remembrance of things past. The only reference he makes to the current series is when talking about post match media conferences — hinting that his perusal mostly followed the newspaper route.

He has delved into his vast stores of recollections to come up with damning evidence against both MS Dhoni and Duncan Fletcher. And again, as anticipated, these ventures down the memory lane have cautiously avoided some of the alleyways where his own self-righteous shoes got soiled.

Now, no one can suggest that Dhoni and Fletcher should not be criticised. The results of the past four tours are there for all to see.

However, there are the old clichés about three fingers point back at you and the inadvisability of throwing stones for people staying in glass houses.

Additionally, some objective analysis is always more helpful than opinionated generalisations. Take the following: “I have always believed that the Indian team’s coach has to be Indian. This mercenary nonsense has to stop some time.” It may be his belief, but in that case he has been proven wrong at least twice. Even the most parochial follower of Indian cricket cannot deny the positives brought in by Gary Kirsten and John Wright.

He has delved into his vast stores of recollections to come up with damning evidence against both MS Dhoni and Duncan Fletcher. And again, as anticipated, these ventures down the memory lane have cautiously avoided some of the alleyways where his own self-righteous shoes got soiled

Instead of dwelling on the current series, Bedi laid bare several simmering nuggets of past memory to provide some spicy feedback. In an interview given to Mid-Day, Bedi said: “I was watching an India versus South Africa Test a few years ago and through the stump microphone, one could hear Dhoni instructing his leg-spinner [Amit Mishra] ‘khareed mat, khareed mat‘ (don’t buy your wicket). I said to myself, ‘Bedi, you should thank your stars you are not playing under this guy.’”

That may be the case, and I am sure the feeling between Bedi and Dhoni is mutual. But, Mishra played only one series against South Africa, at home and way back in 2009-10. Bedi has to dig that deep into the past to underline where Dhoni comes up short as skipper. Did he watch the recent Test matches at all?

The two Test series he was referring to ended with a 1-1 score-line. India managed to win the second Test at Kolkata. At the end of the match Harbhajan Singh had made some caustic comments while pointing openly at the photograph of Bedi himself. At the end of the series India managed to hold on to their No 1 Test ranking. Mishra being told not to purchase wickets perhaps did not hurt India too much after South Africa had triumphed by an innings in the first Test. Perhaps it even benefited the team, who knows?

Bedi was also once part of a 1-1 score-line, long back in 1975-76. Coincidentally that series took place in the land where the Indians have just concluded their tales of misfortune — New Zealand. He did not play the first Test at Auckland and under Sunil Gavaskar’s captaincy India took a 1-0 lead. Erapalli Prasanna did the star turn, capturing eight for 76 in the second innings. In the second Test at Christchurch, Bedi was back at the helm and the match was drawn.

In India lost the third and final Test at Wellington by an innings. The remarkable fact was that Bedi bowled 27 overs himself, had Bhagwat Chandrasekhar bowling another 22. Prasanna, the match-winner in the first game, was given 8 measly overs. It allowed New Zealand to take a 114-run lead.

Did Prasanna thank his stars for playing under Bedi in that Test? One wonders. There were also those run chases in Pakistan when he practically lost two Test matches through a combination of poor tactics and overconfidence in own his bowling. But, then, those curious bits of captaincy have long been submerged under the self-important halo that he seems to don with immense confidence.

His other carping complaint was about coach Fletcher, “You need somebody who is assertive and accountable. Can you imagine, the coach not appearing before the media and kids are thrown in front of the press. What’s the captain and coach there for? Can’t you face the media?”

Of course, Bedi knows all about facing the media for the team. He himself had been manager to the Indian team to New Zealand in 1990. After a defeat in the Rothmans Cup to Australia at Christchurch, he had famously declared to the media: “The entire teams should be dumped into the Pacific.” It not only embarrassed the whole team, but also made Bedi and the Indians laughing stock in New Zealand. The very next day, the hosts were bowled out for 94 against Australia and suffered a big loss. Captain Martin Crowe’s statement had been, “We are not jumping into any ocean.”

If Fletcher has not spoken to the media, he has actually done a lot better than publicly asking his wards to jump into Pacific or the Indian Ocean.

The other remarkable facets of Bedi’s tenure as manager were taking credit for India’s victories in the One-Day Internationals (ODIs) in England. While in England, he faced the media yet again, this time with a written statement, lambasting Sunil Gavaskar for refusing the offered MCC membership.

When Mohammad Azharuddin was finally relieved of Bedi’s domineering presence in the dressing room, he heaved a sigh of relief and started winning Tests at home. He later went public saying that Bedi’s ridiculous methods of training had prematurely ended the careers of two promising fast bowlers Atul Wassan and Vivek Razdan.

Bedi’s current thoughts perhaps did not manage to rekindle those bits of memory.

At present, Bedi has voiced that he was appalled at Dhoni’s excuses in the post-match press conferences. Well, there he can really help the Indian side. During his days as manager, he was known to come up with such stimulating lines for losses as “We didn’t win and finished last in the tournament, but only the games in which India played were exciting.”

Bedi also felt that there is something broken in the dressing room at the moment. He obviously has some divine insight which allows him to mentally cross the same oceans he had asked the team to jump into, and listen to the goings on inside the Indian camp. Yes, he is famed for his vision and ability to feel far-off pulse. In the summer of 1990, he had pounced on Gavaskar’s refusal to accept the MCC membership saying, “You have let down the Indian team and the members of the Indian community living in England.” One still does not know how he had become the spokesperson of the Indian community in England, and who in that community had informed him that Gavaskar had let him down. As for the team, even the unsophisticated Azhar had come out with a brilliant one liner, “Team did not know they were let down by Gavaskar.”

Bishan Bedi’s reactions and press conferences can be explosive, but they have become too predictable and rather devoid of substance. It is fast taking the form of sound and fury signifying nothing.

He should perhaps take a leaf out of his bowling, which had all the right ingredients that his verbal volleys now lack — smooth, controlled and full of variety. 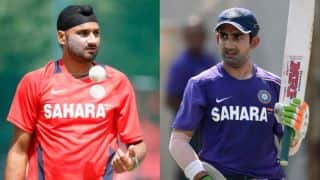