Pietersen knows he will not be selected like any normal cricketer, and hence decided to officially apply for a post.

England discard Kevin Pietersen, who has left no stone unturned to make a comeback in the national side, has, in a sensational move, applied for a new job that shook the cricket fraternity around the world. Pietersen, the right-handed middle-order mainstay who used to be among the top run-scorers for England, was axed from the national side for underperforming in Ashes 2013-14 in Australia. England were also not happy with Pietersen’s overall attitude, though this time there were no exchange of hyper-sensitive dressing room information.

According to reliable sources, with England failing to find a single opening batsman who can hang around with Alastair Cook for a while, Pietersen has decided to come to the rescue and throw his hat in the ring. According to the source (no, not Piers Morgan), Pietersen has written a lovely email to England and Wales Cricket Board (ECB) asking to be employed as an opener. Pietersen knows he will not be selected like any normal cricketer, and hence decided to officially apply for a post he believes England are not able to fill.

Since the retirement of Andrew Strauss, England have tried as many openers as Australia has tried spinners since Shane Warne’s retirement, but got little success. England have tried many from the county circuit but have failed to find a cricketer who can bat alongside Cook at the top. Michael Carberry and his broken bat were axed post Ashes 2013-14 because England needed someone to fire; Sam Robson — the bloke flicked from Australia’s grasp; and Nick Compton — the grandson of a legendary English cricketer thrown away despite heaps of runs, are few names that come to mind. ALSO READ: Andrew Strauss-masterminded #StraussLogic triggers laughter club

Though Pietersen keeps telling the world about the luxurious life he is leading despite his main source of income being taken away, he does not want to stop trying for a job with England cricket. Pietersen is among the most active cricketers on social media, and keeps teasing his fans with photographs of his expensive holidays around the world on Instagram. Despite all this, however, his heart lies in cricket.

Sources close to Pietersen (no, not Piers Morgan) say that while the maverick cricketer keeps investing in new businesses and tries to take his mind away from cricket, he fails to do that on most occasions. Earlier this summer, England told Pietersen that he does not have a future with them, but Pietersen has not given up. ALSO READ: England, Kevin Pietersen and the farce in name of cricket management

The sources (no, definitely not Piers Morgan) inform Pietersen has gone out of his way to please the ECB bosses. He has sought 15 minutes to explain his claim and has made a 100-page slideshow (with some help from Ed Cowan) to explain why he is the best choice to partner ‘old buddy’ Cook at the top. Pietersen has ‘applied for a new job’ just like any other professional does in any other profession, as he believes no other player works harder than him. ALSO READ: England cricket must be profoundly ashamed for its treatment of once-in-a-generation cricketer like Kevin Pietersen

This source, obviously pleading anonymity, claims that Pietersen wants to refurbish his image as the perfect professional who comes to work, finishes his job with deftness, and leaves for home. Pietersen is done with controversies and wants to start afresh.

“Mr Pietersen knows there are trust issues. If England are angry with Mr Pietersen over certain issues,  Mr Pietersen, too, is not happy about how he has been handled. But for the betterment of English cricket and to save them the embarrassment of not finding an opening batsmen for innumerable years has softened Mr Pietersen’s heart. Mr Pietersen is ready to take that extra step; Mr Pietersen says it is for England, and not for him,” the source said.

We tried reaching Andrew Strauss, Director of England Cricket, for his reaction — but his agent quashed our request, saying that he was busy in a brainstorming session with Cook, zeroing on what kind of pitch England would like to have for the fourth Ashes 2015 Test. Others in ECB said Strauss is the only man responsible for all these trivial matters, and they would not speak. 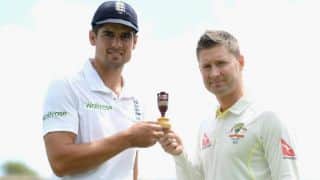 Guess, what unwell Chris Gayle is thinking about?