Brendon McCullum has emerged into the man who he should have been years back.

Brendon McCullum pulled off a potentially Test-saving performance at Basin Reserve. Abhishek Mukherjee takes a memory down the lane on the evolution.

Remember the Shaz and Waz show that used to be on television about a decade back? ESPN-Star had put their two debonair men, Ravi Shastri (Shaz) and Wasim Akram (Waz) for a show (that almost invariably involved a pretty girl) at tea-time. It used to be quite a hit during India’s tour of South Africa in 2003-04.

Had the show been held in 2008 it may have been called the Shaz and Waz and Baz show: by that time Baz (Brendon McCullum) had won the hearts of Kolkata by playing the highest Twenty20 innings. McCullum was a maverick who could tear attacks to pieces, a hot property for franchises, completed with muscular tattooed forearms.

Time changed things: Baz took a major decision when he quit wicket-keeping in Test cricket for good, but McCullum knew exactly what he was doing. He turned the Uppal Test around in 2010-11 when India had taken a 122-run lead; with some help from Kane Williamson, McCullum helped the visitors save the Test. He scored a career-best 308-ball 225, and his aggressive assertiveness got his side out of the hole.

“It was a flash in the pan”, we had thought. “The guy is, and will remain that aggressive batsman who could rip attacks apart. He takes too many risks and cannot get away with his strokeplay in Tests.”

Even after the belligerent 113 at Dunedin and the outrageous 224 at Eden Park we doubted his ability as a Test batsman. “Isn’t he just getting away with strokeplay?” We had thought. But then came Basin Reserve, and with it arrived McCullum — The Fulcrum.

The world of cricket has possibly witnessed Baz, the tattooed Baz, the reckless Baz, the carefree Baz emerge into the man who he should have been years back.

Consider the situation: New Zealand were trailing by 246 in the first innings; Zaheer Khan had reduced them to 94 for five; and it was just past lunch on Day Three. They had absolutely no chance of saving the Test — or at least that was what we thought. Never did we expect a Genghis to turn into a Buddha overnight.

The seemingly unstoppable cannonballs were met by the immovable rock; and when there was another shot, aimed at the narrow gap adjacent to the rock, a new obstruction cropped up in the form of BJ Watling; between them they held the Indian attack at bay for hours, adding 352 runs in 123 overs.

The Indians kept on firing, and it was probably too late when they wore Watling down; but out came James Neesham, who grinded it out with his captain. McCullum increased the scoring rate, and by stumps the pair had added 125 in 28.4 overs. The Test had been as good as saved. He remained unbeaten on 281 at stumps — a number Indians fondly associate with rearguard actions.

A quarter-of-a-century later, McCullum’s innings will be remembered as one of the finest batting performances of the era. His amazing self-restrain is easily reflected by the fact that he has (so far) scored at 53.5 runs per hundred balls this innings; it remains the slowest of his hundreds.

With 5,198 runs at 38.22, McCullum ranks fourth among New Zealand batsmen. He needs less than 250 runs to reach that number-six spot, which should ideally have made him a Test legend in the history of New Zealand cricket. As a captain he has scored 1,100 runs at 52.38 — only the second in their history in terms of average, marginally behind Martin Crowe’s 1,466 at 54.29.

The world of cricket has possibly witnessed Baz, the tattooed Baz, the reckless Baz, the carefree Baz emerge into the man who he should have been years back. He still plays his strokes, but selectively; and when he has silently moved up the ranks to emerge as one of the finest in contemporary cricket. 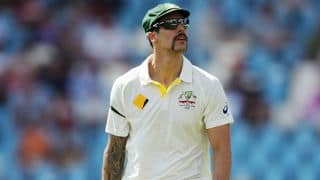